One of the biggest challenges in exemplifying genre impulses is to retain its foundational flavors even after incorporating individualistic alterations of musical growth. Upcoming artist Isaiah Steward is presenting to the world incredible overlaps with pop, R&B, and soul and creating musical territories alongside the thematic depiction of love, life, and mutual belongingness. His newly released song ‘Ride For You’ is a beautiful creative progression that utilizes a lyrical expansion about love and a musical retrospection of modern-day timbre and trembles as the benchmark of how the standards have formulated into a more flexible arena of personal artistic choices. ‘Ride For You’ stands as the sound of today’s generation in the most stupefying of ways. 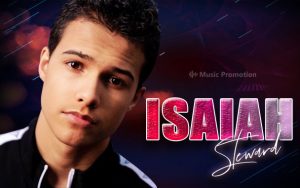 18-year-old Texas upcoming singer Isaiah Steward from Dallas, Texas has the expressionist qualities of a true artist who is venturing out of his comfort zone to create his own musical quintessence. Being both a dancer and a singer, his comprehensive image imbibes the best creational presentations to sweep the audience off its feet. Hailing Michael Jackson, Chris Brown, and his parents as the biggest impetus and inspirers of his life, he has so far captured the essence of affection and intimacy with his track records. Some of his other covers including ‘You Got it Bad’, ‘Perfect’, and ‘I Need You Now’ all have the innate distinction of being the neo-wave resurgence of pop glazed R&B and soul.

Isaiah Steward’s career as a musician may be just starting out but his extraordinary senses of a potential artist’s mind are already making its way into the mainstream industry. Comparing his musical endeavors with the mellifluous sound of Beyonce, Ariana Grande, and Justin Bieber, he is not only cleansing his melodic aura but also gaining cultural reception of being the sound for the new-age music enthusiasts. Follow him on Soundcloud, Instagram, Facebook, and Twitter and experience modulating dynamics of a hybrid genre perspective like never before.

Enjoy the Soul Music only on Soundcloud : https://soundcloud.com/isaiah-steward-1/ride-for-you

The Hypnotizing Soundtrack, ‘Down For Me’ By Isaiah Steward Has Become A Masterpiece