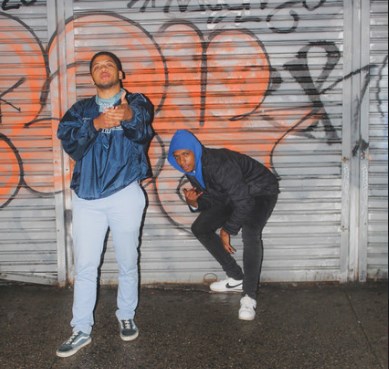 The contemporary lines of creative hybridization in music are being portrayed by upcoming duo Osei and Armani in their newly released track, ‘Moonwalker’.

(WorldFrontNews Editorial):- Atlanta, May 7, 2020 (Issuewire.com) – Music’s limitless boundaries are being claimed by some of the most unique and creatively enriched acts. Displaying a hybrid genre with conspicuous currents of the boisterous fusion rock scene, upcoming duo Osei and Armani, and their straightforward weave of lyrical encapsulation. They recently released a single, ‘Moonwalker‘ that has elevated their accomplishment as musicians to a whole another level. Brimming with the depth and virtues of struggle through their thematic content, they have laid the foundation of eccentric storytelling through rhythmic juxtaposition. The song blooms into a mayhem of honesty that is evident both in its display of words and musical arrangement proximities. The duo has concurrently grasped the energy of the song and carried it forward till the very end, bringing the whole act to a full circle, both technically and metaphysically.

The duo, hailing from East Atlanta is associated with the Dreamakersstudiosand over the years of salient creative presentations and performances, garnered quite a name around the scene. ‘Moonwalker‘ has marked the beginning of yet another chapter of their creative nurturing that will continue to discover new influences and sounds. Currently, some of their songs that are playing on the loop include ‘Mas Fresher‘, ‘Perfect Timing‘, ‘RaRa‘ and ‘Bouldercrest Basement‘. Their interpretation of rap and hip-hop through unparalleled poetic insinuations talking about worldly emotions and struggles follow through the entirety of their soundscape.

The duo Osei and Armani‘s inspirations lie in a wide range of music and artists from Kanye West to Frank Sinatra. This becomes self-explanatory of their hybrid musical style. Hitting the right tracks of hip-hop’s colossal story through a fusion, melodious, and intense arrangement, they have garnered an expansive audience stream as well. For the year 2020, they will be releasing a new song every Friday thus continuing their creative contribution. Follow their work on Spotify, Instagram and Twitter for a virtuous hip-hop experience and sound dimensions.

Listen to this song :