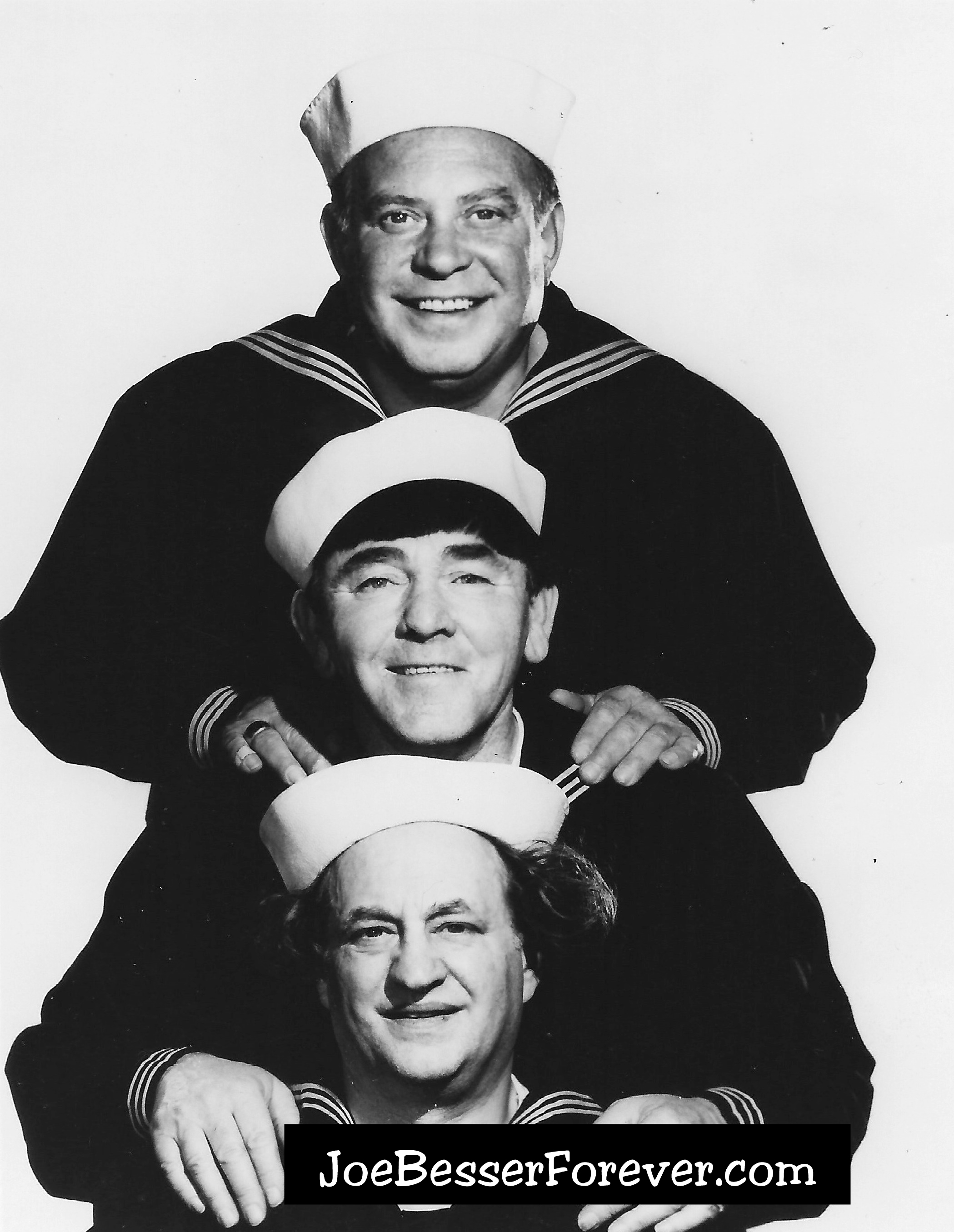 JoeBesserForever.com is a companion to Besser’s revised, updated and enlarged autobiography, Once a Stooge, Always a Stooge, now back in print, which Lenburg and his brother Jeff co-authored.

The Lenburgs are co-authors of The Three Stooges Scrapbook – Updated Edition, with Joan Howard Maurer, the daughter of Moe Howard, the mop-haired leader of the Three Stooges.

The new website features nearly 170 high-definition clips, many rare and never before seen until now, from Besser’s nearly 350 memorable movie and TV roles, including as the malevolent brat, Stinky, on The Abbott and Costello Show, as a member of the iconic Three Stooges comedy team, as the frustrated and henpecked building superintendent, Jillson, on The Joey Bishop Show, and so much more.

“Joe Besser was an extremely funny comic with an original character who entertained audiences for six decades with his hilarious antics. He long deserved this honor,” said Lenburg, who, with his brother Jeff, knew Besser and his wife Ernie personally for nearly two decades and also served as Besser’s press agents. “In launching this website, I want to preserve Joe’s legacy for this generation and generations to come.”

Besser replaced Shemp Howard, Moe’s brother, as the third stooge in 1956, appearing in 16 short-subjects distributed to theaters from 1957-1959.

When Besser was unable to continue to with the Three Stooges act due to his wife’s ill health, Joe DeRita replaced him as the third stooge.

From the 1920s to the mid-1980s, Besser worked in virtually every medium including vaudeville, Broadway, stage, radio, motion pictures and television, including voicing popular Saturday morning cartoon series.

He first honed his comedy craft when he worked as a bumbling assistant to the world-famous Thurston the Magician in the 1920s.

With Thurston, he carved out success with his own act–that of a childlike sissy who brandished his foils with a flick of the wrist and such hilarious verbal assaults as “Ooh, you cr-a-a-zy you!” and “Not so f-a–a-s-t!” It was that character that first caught the nation by surprise with such hilarious antics on popular radio shows of the 1930s, making Besser an instant hit with audiences.

Besser left an indelible mark, making audiences howl with laughter on the Jack Benny, Milton Berle and Fred Allen radio shows. He success later led to starring roles in three feature films and his own short-subject series in the 1940s and 1950s for Columbia Pictures.

Most memorable highlights of Besser’s long film career include: playing Sheriff Sharkey Dolan opposite Marjorie Main and Percy Kilbride (Ma and Pa Kettle) and actor-singer-dancer Donald O’Connor in Feudin’, Fussin,’ and A-Fightin’ (1948), cast with Shemp Howard (before he later replaced him as a the third stooge) in Abbott and Costello’s Africa Screams (1949), being teamed with the Great One, Jackie Gleason, in The Desert Hawk (1950), cast in his first dramatic role in Bing Crosby’s Say One for Me (1959), and playing another serious role, a joke writer, in Marilyn Monroe’s Let’s Make Love (1960).

A favorite of the critics, Besser has rightly earned the title of most prolific third stooge because of his huge legacy without the Stooges: in all, he appeared in 28 feature films, 11 short subjects of his own, and nearly 300 television appearances. That’s quite a career which also includes 56 known radio show appearances (as well as his own radio series, Tonight on Broadway) and stage and Broadway shows such as the immensely popular Sons O’ Fun starring Olsen and Johnson which catapulted him to stardom. He also voiced more than 120 Saturday morning cartoon episodes. 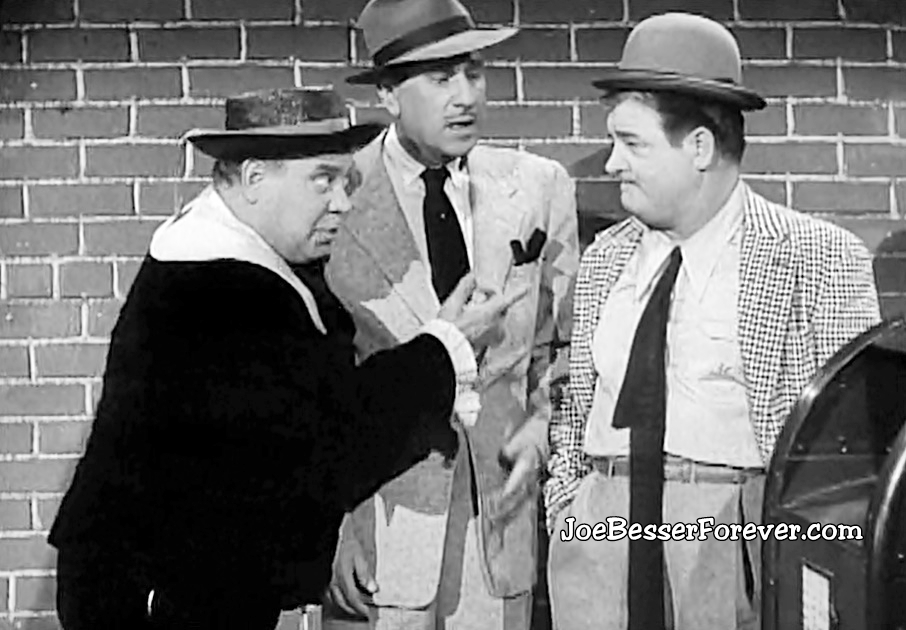 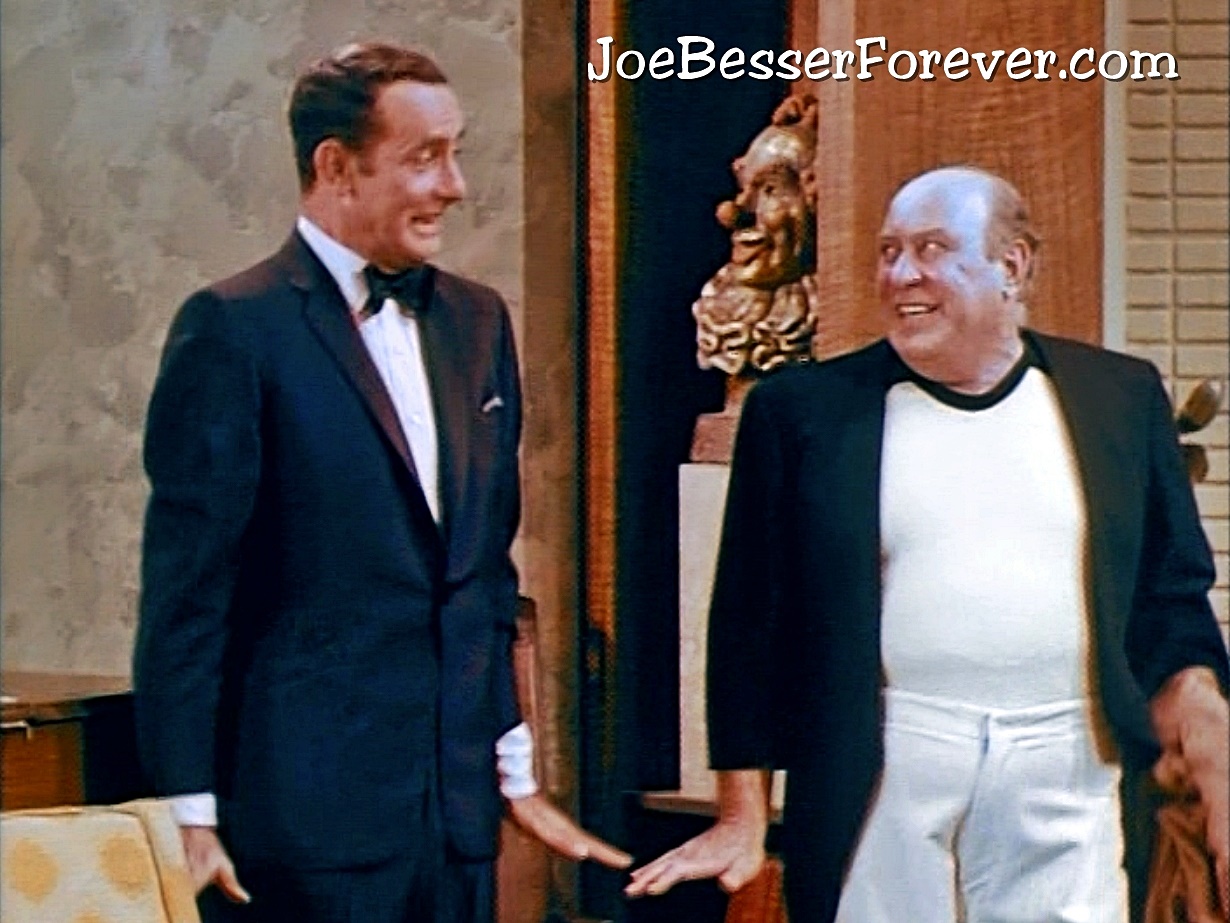