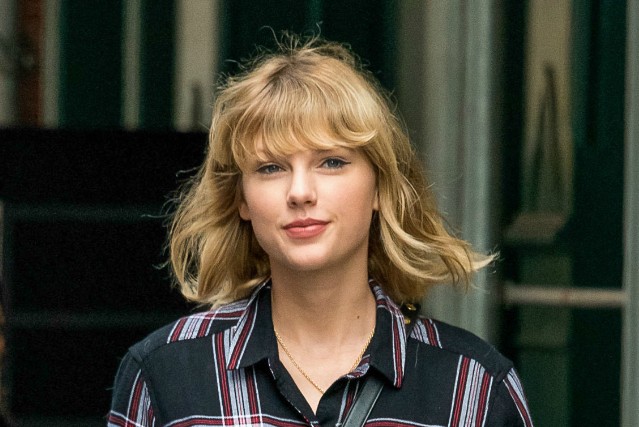 After revealing that the label Big Machine Music had blocked her from using her own music for a Netflix documentary about her life and her American Awards Performance 2019, two honest fans of this diva stepped up to reach out to BMLG and inform Braun how were they feeling about this situation.

Soon after the 29-year old’s Tumblr post got quickly viral and became an entire social media campaign, two passionate Swifties who go by the names Haley Spalding and Kyle Graden started a GoFundMe Campaign over the weekend in an endeavor to get their message heard by Braun.

The disagreement, however, got resolved on Monday and these super fans crowdsourced over US$1,004 and used the earned money to put up two digital Billboards outside of the BMLG headquarters.

The two enormous Double-sided LED screens which were put up for the reason requested Scott to let Taylor perform her own songs on one side and on the other side it was written I Stand with Taylor hashtag.

The two Swifties on their joint fundraising effort wrote that the billboard has been used to show their support for Taylor and to preserve her right to perform her own music.

The campaign received an instant thump up and got closed on the same day in less than 24 hours after it reached its target of collecting $1000.

On being questioned as to what had motivated them to conduct such a campaign, Spalding confirmed that Taylor has been contributing music i=since she was 14 years old and she deserves all the freedom to use that art.

The Indianapolis, Ind fans also added that Taylor’s platform is so huge that helping her would help other artists as well and this is what kept them motivated to contribute something besides a tweet and post on both Facebook and Instagram.

She concluded her statement by saying that both of them wanted to come up with something that would catch Taylor’s eye and show her that her fans are standing by her side during her tough times.

The rotating billboard which is put up has been reportedly designed by fellow Swiftie named Isabel Rocha and is supposed to be standing tall by BMLG’s Nashville HQ for a week.

According to globalnews.com, the whole campaign thing had a positive outcome and the Wildest Dream singer has now been allowed to perform a previously planned medley of hits at the Sunday’s AMA ceremony.

Further, the deal between BMLG and Dick Clark Productions says that Taylor can now perform all songs from her pre-2018 music catalog again which will be broadcasted on any TV.