Jay Singh is known by the name Indian Trap in the music industry. His first love for music was urban music, especially hip-hop and R&B, also Indian Music. In the year 2002, he won the Ministry of Sounds DJ idol competition in London, United Kingdom, which opened the doors for him in the music world. In 2008 he got the opportunity to come and work with most renowned artist and has remixed music for Beyonce, Lady Gaga and produced tracks for Cassie and Shakira. After receiving huge success with his song ‘Look Like Monayyy’, he came back with his new track ‘Trapped’. 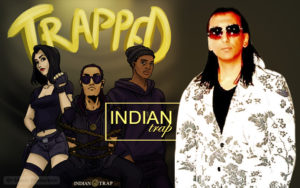 Indian Trap’s new track ‘Trapped’ is a fusion of Trap and Hip-hop music combined with Indian rhythmic percussion and sounds with banging dirty 808’s. In this song, he featured one female rapper Kreszenia and R&B artist Chris Scholar.  The music in his track creates a beautiful ambiance and the hook in the track is incredibly soulful. There is a good balance between story-telling and personal reflection. Lyrically and rhythmically this track is one of the most addictive and striking songs. The clear contrast between the verses and the hook adds certain dynamics which make the song stand erect.

The track ‘Trapped’ by hip hop singer from Los Angeles Indian Trap has calming Soundscape. The subject matter of the track has effective meaning and the mood of the music feels accessible and quite uplifting. The flow and the lyrics in the tracks meet at the latter half of the song increasing energy and brightness of the track perfectly well. The whole thing in the track grows more and more intense as it evolves. If you want to listen to his songs then tune to Soundcloud and watch his music videos on Youtube. To get more updates about his upcoming songs then follow him on Facebook, Twitter, and Instagram.