The Hypnotizing Soundtrack, ‘Down For Me’ By Isaiah Steward Has Become A Masterpiece

Soundcloud is cheering a new, emotional track ‘Down For Me’ composed by the upcoming, young singer Isaiah Steward. This busiest music gallery always provides opportunities to a young, budding artist to unveil their musical talents by assisting them to upload their musical performances over there on Soundcloud. This time also, it has promoted an impressive R n B and Soul rendition ‘Down For Me’ by the Texas upcoming singer which has already earned huge rounds of applauses.

This compelling rendition ‘Down For Me’ is endowed with a soulful tune which engages the minds of the ardent music buffs with profound emotion. Audiences can feel the pain for their beloved when they experience this soaked in emotion song. The captivating voice quality of this rockstar will surely melt your heart and you will be eagerly waiting to listen to some more works from this fascinating voice. 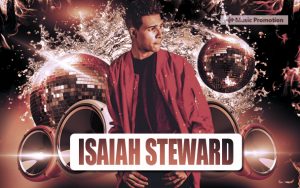 The mellow tempo which sweeps this song into the domain of addictiveness sounds blissful to the ears.

The moderate beats of this song triumphs over the minds of the music admirers who don’t want to stop playing this track and they keep on playing this outstanding track over and over. In spite of having a soothing timbre, it generates an aura of extreme energy which will stimulate your soul and you will feel charged up for the rest of your day.

Isaiah Steward belongs from Dallas, Texas, who has already received quite a lot of recognition for his remarkable music creations. He has been more popular for his past performance at High School Nation Tour Texas. On last June 30, he gave a mind-blowing stage-performance at Lava Cantina in Dallas. He is immensely influenced by prominent artists like, Michael Jackson, Justin Bieber, Beyonce, etc who have motivated him to create such magnificent renditions. Check him out on his Facebook, Twitter and Instagram accounts.