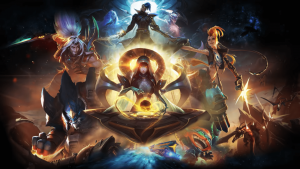 Fans have been quite excited to take part in the latest game mode of League of Legends, released in June, this year.

It is an auto battler game that features 8 players and throws them into an arena. The players then build their team and fight it out until the last man standing. The game has been quite a success, as it has been frequently updated and new editions have also been brought in.

The recent update is that the new origin of TFT will have four champions.

Champions are characterized by their origins and classes. And, when Champions that share their traits get positioned on the board together, they are rewarded with bonus points.

The new origin of TFT is known as Hextech, and according to a statement made by Riot Whale on the PBE feedback forum, the enemy items can be temporarily disabled by Hextech units; but the actual mechanic behind this is still unlocked as it is still under iteration.

PBE allows the players to watch from the very start of the combat and can see when the trait throws a bomb at other teams that disables enemy items for 5 seconds along with two Hextech being present on the board and around 15 seconds with all four of them present.

Items are a very significant part of the game and they can be acquired through RNG drops while combating in PvE rounds with monsters and minions. During the carousel round players have the opportunity to choose a champion and reprocess them to gain any item.

Single items benefit with small stat buffs but when combined with other items, they provide more significant buffs to champions.

These items can significantly influence the course of a game. Thus the potential of players to disable the items can provide them with new and exciting gameplay and countering ability.

Camille, Jinx, Vi, and, Jayce are going to be the four new champions to League of Legends game mode.

Camille will be an expert in operating blades and can be bought for 1 gold. The Blademaster will have the ability to root her current target while influencing other fellow champions to focus on the target. This special feature is known as Hextech Ultimatum.

Buying Jayse will cost 2 gold and her ability will be a combination of Thundering Blow and Transform Mercury Cannon. This ability allows him to throw his single competitor away and then his weapon transforms for long attacks and also will have increased speed. He will be known as Shapeshifter.

Vi will cost the players 3 gold and will be known as Brawler. She will have the ability of Assault and Battery, quite similar to the focused grabbing mechanic of Blitzcrank. This ability helps her to target enemies that are far away from her. She keeps causing damages while charging at the attack and throwing all the enemies coming in her way.

Jinx will have the ability of a Gunslinger and can be purchased with 4 gold. Her ability to getting excited will give her additional speed while attacking if after killing her second enemy she exchanges her weapon to Fishbones.

Riot Whale in his statement also shared the reason for creating Hextech Origin- it will provide more counter-attacking abilities to the overpowered players. And, the new four champions will create provide diversity to the gameplay.

It will also change the pace of the game as there is a lot of different capability mechanics in the champions and it would be quite fascinating to see how these champs make way into different teams.

Also, Riot Games have mentioned that they will keep updating the game to keep everything fresh and exciting. The ultimate goal is to have a constant change of Traits and champions so that players get to experience something different every time.

With various changes in the game mode within two months of its launch, the players have to keep their game up-to-date as the game is constantly evolving.

Though no official date of release has been announced, yet the players can experience the new updates on the PBE testing servers.