Hitman Marco, the Atlanta Based artist has shown his funk in the song ‘Just Pick Up Da Phone’ 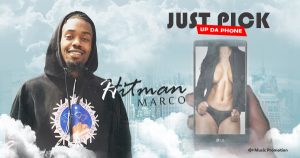 Hitman Marco is a young male artist in the genre of R&B and soul music. The terrific singer hails from the beautiful city of Atlanta from where his musical journey began. The Atlanta based artist Hitman Marco has come up with his new rendition ‘Just Pick Up Da Phone’. He has his own production house called ‘Hitman Productions’. He believes that his music in the genre of R&B, soul and hip hop have a very sensuous and seductive feel to it. The singer has been influenced by music legends like ‘Lil John’ and ‘Outkast’. He is also influenced by musicians like ‘Three 6 Mafia’ and ‘Pastor Troy’. As of now, he is working on his EP called ‘Bedroom Music’. You can get in touch with the singer through Facebook, Twitter, and Instagram and share a friendly banter with him. You could also listen to his music by plugging Soundcloud and Spotify.
Hitman Marco in the song ‘Just Pick Up Da Phone’ has shown brilliant artistry. The song has a rhythmic warmth to it with high-intensity vibes full of high energy. The songs are set in the backdrop of heavy electronic. The rap flow in the song shines brilliantly from the outset. The songs have an incredible rasp that is evident from the vocal style of delivery. The songs have a classical and cool feel to it.
In the song ‘Just Pick Up Da Phone‘ by Hitman Marco there is an element of fusion as well as a soft funk to the song. This instills confidence in the song. It makes the listener strutting down the high street in a carefree manner. The upbeat bounce in the song is quite uplifting. Along with it, there is a jazz cafe bounce to the song which is very much motivational. The performance in the song is quite stunning and profoundly addictive.
To listen all the tracks, Please visit the link given below :
https://soundcloud.com/hitmanmarco
To get more update just click the given below links:
Instagram: https://www.instagram.com/hitman_marco_/
Twitter: https://twitter.com/hitman_marco