Cheno Royal drops off exciting and electrifying tracks that mark him as a versatile rapper. It’s not how to start a race, but how you manage to finish it off on a striking note and Indiana Rapper Cheno Royal knows how to push it hard with his flawless vocal stretch that navigates to stardom. The tracks highlight the artists relentless and powerful rap flow that takes full charge of the soundscape. His unique style of musicality gives his passion a positive outlook and has been giving him a winning streak in all his releases. 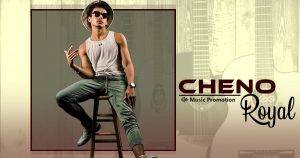 Cheno Royal has delivered work that is soon to top the charts, establishing him as one of the most successful talents. The talented rapper has several playlists and tracks under his hood. Few must listen like ‘Never Have I Ever (Prod. By Paul Fox)’, ‘Cheno Royal Ft Kobba-All I Wanna Do’, and ‘Better Run (Prod. By Paul Fox)showcase his clever rhymes, joyous flows and exciting production capabilities all wrapped together to leave the listener in splits. His highly energetic tracks attempt to set itself apart as something more recognizable. The music is well built with a dance-like rhythm that very well complements the rappers’ delivery. The tremendous changes in the chord pattern scream for attention and the artist goes on to wonderfully express his storyline.
Coming from the United States, Cheno Royal firmly believes that Royalty doesn’t come with birth but is very much dependent on the way a person chooses to live life. The thought is very well stamped in his songs that make the listening experience a compelling one. The artist draws his inspiration from J Cole, Kendrick Lamar, Joyner Lucas and others to shape his music. Listen to his tracks on Soundcloud and follow his updates on Facebook, Twitter and Instagram for catching up with his future projects.
Check his all latest tracks on soundcloud : https://soundcloud.com/chenoroyal