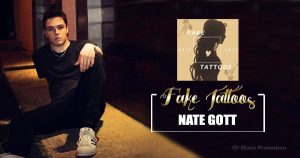 Nate Gott is one of those very few music artists whose natural voice flow is something magnetic that instantly connects to the listener for its realness. Fused with love, emotions and an extremely melodious tune, the recent track from the artist is a pure gem that endlessly hooks the listener. The lyrics work wonderfully to prove his soulful voice that lingers throughout the track in the most hypnotizing way. This artist has outranked other artists with his sophisticated and melodic voice that knows no limits in term of emotional depth.

The talented songwriter and producer have poured his heart out in his latest soundtrack ‘Fake Tattoos‘ which the R&B musician has emphatically composed under his label Music by Gottit to create moments of euphoria with his charming vocals. As the song kicks off, the listener is driven to trance while floating on the mesmerizing voice that shows his proficiency as a talented music artist in every sense. The track is warmly folded with emotional lyrics that hold close to his emotions. The R&B musician from Nashville Nate Gott passionately delivers the heartfelt lyrics in the track ‘Fake Tattoos’ which states how he has overcome a difficult time with his love interest and finally leading a good life with her. Everything the listener hears shows his warming vocal harmonies as he honestly expresses his love for the girl.

Coming from the United States, Nate Gott has produced this stunning new work by associating with Soundcloud super-producer Kryptic, who is also known to have produced star Shopping by Lil Peep. The superbly well-built track has the guitar and trap elements to gorgeously uplift the feel of the song and it only gets better while progressing smoothly. Listen to his catchy vocals on Soundcloud and catch up on his upcoming work on Twitter, Facebook and Instagram.

To listen and enjoy this song please visit the given soundcloud link :

To know more check out the following social sites :