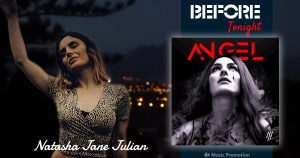 Natasha Jane Julian showcases her sleek and shiny vocals in her latest pop sound that takes a slightly eclectic approach to her music. The singer-songwriter stays focused on immensely melodic tunes that are very much hard to resist as she offers her encapsulating vocals in an undeniably sultry smooth way to enrich the pop record. Surrounded by slow tap rhythms the song shows the California pop singer singing in the most expressive manner to show light on the core message of the record. The straightforward yet vulnerable emotion conveyed in the lyrics is beautifully transmitted through the artist’s crystalline voice that sounds immersive and makes for a very sensual listening experience.
Natasha Jane Julian is an extremely talented singer from LA, who has exclusively exposed the loopholes in today’s humanity through her effective songwriting in ‘Before Tonight’ and delivers the lyrics through her passionate and immensely mesmerizing voice. She has a passion for moody yet melodic pop vibes and compelling provocative lyrics which she has stylistically showcased in her latest sound release. The song shines bright with its central message which puts the light on a universal topic, suicide. Natasha reveals her deep compassion towards those who lost lives and inspires people to take a stand for the ones who are battling in their daily lives to overcome the same. Her voice is emotional, vulnerable and beautifully portrays the whole scenario.
The artist doesn’t step back from pushing boundaries on such topics, rather highlights them in a haunting way through her music. She has several top-charting records under her hood and has just released another EP ANGEL in collaboration with Dom Morley. She is definitely riding high on spirits and motivation by collecting such achievements in such a short time. Listen to the song on Soundcloud and YouTube and follow her on Twitter, Instagram, and Facebook for more updates.