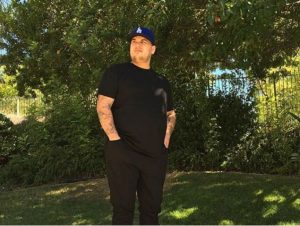 The fans have become worried as Rob Kardashian focused on mental and physical health and now questions are arising on his comeback.

In the latest videos of Arthur George sock founder show, Rob seemed to be quite thin. Recently, in a short clip of Kim’s birthday party, Rob was seen to be chilling out with Chicago West and the fans didn’t take too long to notice that he had lost some weight.

As stated by a close relative of the Kardashian family to the E! News, Rob had completely changed his eating habits and also stopped drinking and these have helped him in sticking to his plans of losing some pounds.

Apart from changing his diet, Rob is regularly exercising and also taking care of his sisters.

The insider further stated that he was working out with a trainer and also involved in playing basketball with his friends.

Kim, Kourtney, and Khloe have always looked after their health and are helping Rob in his exercise routine. The 32-year-old has always had problems due to his weight, mental health, and diabetes.

Years ago a rumor had come up that Rob was finding it difficult to adjust to his life after the failure of the reality TV show. All of his issues eventually turned into gloominess and obesity.

Currently, Rob only wants to focus on his mental and physical health and fans shouldn’t expect a comeback from him any time soon.

The insider revealed that he was way more happy and motivated compared to his previous life.

Dream’s father wants to come back to normal life only for her daughter. His daughter is his pride and joy and he can do anything for his daughter.

Though Rob never had a flair of being famous, he got involved due to the family business. He won’t be making an immediate comeback but fans can expect his future appearances.

Now the question is whether fans want him to come back to the show or not.