Coexisting Reality is an incredible female singer who has shown her passionate side to the global audience with panache. She has come up with the fantastic rap number ‘fakefake’ which also features Yoshi. The song by the Dallas based female hip hop singer has mesmerized the audience with its charm. The singer speaks of a higher goal when she mentions about saving all the species on earth. She speaks about saving the planet as a whole where coexistence will reside and everybody will prosper in a commune. This speaks for the spiritual side of the singer which is unique and has reflected in her songs. Her way of music is hard and weird that makes her a class apart. One can come to know about the latest happenings in the singer’s life by going through her updates in her website with the link  www.coexistingreality.com. 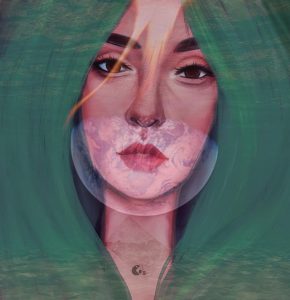 In the song ‘fakefake’ by the female rap sensation Coexisting Reality there is a magical vibrancy in a heavy electronic stage setting. There is a subtle touch of funk that has an alluring swagger. The audience is enchanted by the superlative bounce which is rocking and creates an indelible impression that is etched in the listener’s mind. Other major songs by the singer are ‘How High Are You’, ‘Mickey’, ‘Wizard’ and ‘Distorted’. You can log on to her Instagram handle and glance through the shared updates in the form of pictures and videos and learn about her recent and forthcoming endeavors.

The singer has crafted the mumble in the rap in the array of the song’s soundscape quite incredibly with a deft touch. A ravishing performance is given by the young rapper which has an exquisite appeal. You can check out her songs by plugging on to trending platforms like Youtube. One can also plug into popular music streaming app Soundcloud to listen to her songs.

Check out to listen this song ‘fakefake’ by Coexisting Reality :