The newly released song ‘Don’t Bro Me’ by upcoming New York rapper Tye Parkway has taken the hip-hop spectrum by storm with its creative conviction and intensity. 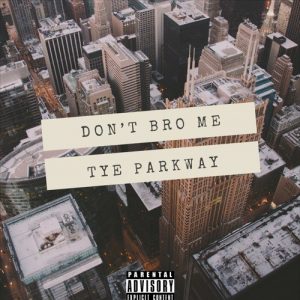 Hip-hop’s colossal legacy is being carried forward by various artists with their own interpretations of musical and thematic standards. Upcoming artist Tye Parkway is coordinating the various elemental blocks of the genre to structure a beautiful and compelling sound stream. His journey has just started to unfold before the larger spectrum and industry of music and he has already turned a few heads and stirred vast audience engagement. His newly released song ‘Don’t Bro Me’ is a consolidated verse of rhythmic blocks, lyrical prowess, and the artist’s vocal fortitude that drives him to attain the zenith of creative grounds. From the arrangement of every constituent of the harmony to creating an easy-flowing groovy affair, he has comprised it all in his song.

Tye Parkway hails from The Bronx in New York City that has helped him imbibe the glorious cultural acknowledgment of hip-hop. Currently associated with the label house So Fancy Entertainment, his debut musical scope has received a lot of exposure and representation. As a result, his future seems bright as he conspires to give his audience some of the best heartfelt musical connections with his music. ‘Don’t Bro Me’ is both empathetic and inspiring in its own terms as it brims with the essence of life definitions beyond the unavoidable obstacles of existence and survival.

This upcoming New York rapper has his lyrical fervor driven by the virtues of accomplishing success, the heartbreaking hindrances of losing loved ones, socio-cultural sabotage, consumerist poverty, interpersonal betrayal and more. All these indispensable elements contribute to the enormity of life that appeal to his audience as stories that assure them of never going through it alone. With a musical trance so relatable and humble, his expansion of musical scope is inevitable. Follow him on Soundcloud, Instagram, and Facebook for more updates on his recent works.