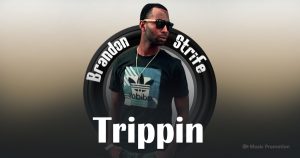 Brandon Strife makes fine efforts to make his name popular in the hip-hop industry and succeeds in his approach by introducing some unconventional elements in his creations. By establishing a sudden chill mood within the first few seconds and then making it hid hard with its trap beats, the latest song released by the California hip hop artist skirts the rules and roles that the audience might expect with rap and hip-hop music. The new song blends the most energetic tunes of the genre and is a weighty project that effectively reveals the artist’s layered personality.

‘Trippin (Lo-Fi)’ is the song that the artist has created by involving his creative flakes and the outcome is an outburst of profound imagination, strong musicality, and the rapper’s expressive rap style. His music exists in the way he utters the words that impressively conveys his thoughts. The song allows the rapper’s voice to stand out smoothly as he focuses on the melody and uncover his vulnerable side that lays bare his potential for the audience to explore his creativity. Brandon Strife is an artist who is completely honest and transparent in his creative ideas and is also a very witty lyrist that propels his compositions to become an instant hit amongst hip-hop lovers.

For the song ‘Trippin (Lo-Fi)’ the rapper has selectively introduced a lot of things that surround his life which includes a lot of things in life that he has lost amidst the confusion of getting involves in weed, alcohol, or self-doubt accompanied with a delusional perspective. It’s a stand out the number in the rap spectrum and deserves high acknowledgment from the audience. The artist draws his inspiration from Wu-Tang, Jadakiss, Styles P, Jay Z, Nas, and Tupac to direct his songs. Listen to his songs on Soundcloud and follow him on Twitter and Instagram for more information.