Hip Hop and its Eccentric Essence is Beautifully Portrayed in Rapper from Iowa, B’s Soundscape 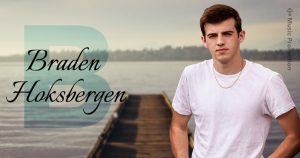 The evolution of rap and hip-hop throughout the ages has introduced audiences with various styles and musical interpretations. Upcoming hip-hop artist B is here to present some of the most rustic and personalized flavors of the genre. His songs capture the simplicity of self-production that pierces right through one’s heart with its honest and relatable musical efforts. His lyrical pronouncement is also immensely commendable as he moves along his songs with a thematic line following the verses. Some of his songs like ‘Sleep Deprived’ or ‘Lifestyle’ are not just relatable but also tell people sagas of real events through structured musical modules.

The rapper from Iowa B, originally known as Braden Hoksbergen may be new to the scope of the industry but his potential is evident in his soundscape. Hip-hop is his foundation for his music although he occasionally implements trap dynamics into his song to give them an extra creative edge. His thematic variations are also vast and differ from song to song as he does not shy away from expressing everyday dilemmas and struggles and interpreting them through his tracks. Eccentric, highly personalized, and a twist of sound modulations, his collective stream truly stands out in depicting known stories of life and existence.

Hip-hop has always been real and straightforward in its lyrical spontaneity and B has trodden the same path of musical style in his soundscape. His other songs ‘USED TO IT’ or ‘DIPLOMACY’ are personal stories with a wide aperture for the audience to find similarity with their own selves. As he continues to expand his musical endeavors across the streams of contemporary hip-hop and rap, his growth as an artist will never cease to flourish. Follow his work of modern-day musical essence on Soundcloud, Twitter, and Instagram and experience the best in hip-hop and rap like never before in your lives.

Listen to more tracks check out the given below link :