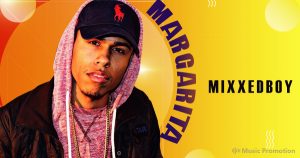 The gifted singer who is also known by the name Daunte is popularly known as Mixxedboy in the musical circuit. He has come up with the fascinating number ‘MARGARITA’. The singer who is a native of San Diego is popularly hailed as the Southern California rapper Mixxedboy. The singer’s second home in Los Angeles and has spent his childhood with relatives whose influence in a big way influenced him to be a musician. The rapper is indebted to his diverse background for the special quality of musical sounds used by him. He single-handedly carries out and delivers the work that goes into the song in its entirety.

In the vivacious track ‘MARGARITA’ by Mixxedboy there are beautiful vocals of R&B juxtaposed in multiple layers with tunes of rap. There is a blissful funk in an engaging soundscape that is incredibly crafted. He has belted out his newest project titled ‘XXX GOD’ that has created a lot of fan frenzy. It has tunes of R&B and the singer has spoken about the cravings of a woman. He is gearing up for his upcoming project ‘N.W.C.C.’. You can plug into the Instagram handle of the singer and catch a glimpse of his future projects that are creating mouthwatering prospects for the audience.

In the song by the astounding rapper, a seductive mood is created with ample guitar riffs. The exotic track has a flabbergasting hook and bone-crunching beats. He has dished out other memorable numbers like ‘Tryin to live right’ that features JF Million Air and ‘She Get it How She Want it’. Both the songs are remixed to ‘Don’t’ by Bryson Tiller and ‘Pick Up the Phone’ respectively. Other major songs by the singer are ‘Kings & Queens’ and ‘Pornography’. You can get logged on to popular music streaming sites like Soundcloud to listen to his incredible scores.

Listen to this track :