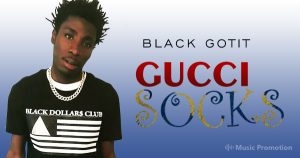 With uncanny prowess of songwriting and rapping, the LAS VEGAS trap singer BLACK GOTIT makes a major song ‘GUCCI SOCKS REMIX’ in his career with another artist Zayrich.

When the world is standing at the edge of the worst climax, the upcoming rapper BLACK GOTIT is determined to keep everyone entertained with his powerful trap number ‘GUCCI SOCKS REMIX’ featuring another young talent, Zayrich. It is released in May 2020 and currently streaming on SoundCloud as one of the fastest-selling records of this year. The LAS VEGAS trap singer comes with a new idea to merge trap vibes with soft R&B flow of music that has created history in the musical spectrum in America. His trap rap finds another entity that can be called the new hybrid mix of hip hop through the new song presented by Smith production house.

BLACK GOTIT has gained prominence shortly after his success in the fiery rap song ‘TEMPTED’ and now his fast fame inspired him to make some delightful club numbers. Since all the people are stuck at home that gives him another massive opportunity to come with a new song number ‘GUCCI SOCKS REMIX’ crafted in tantalizing melodies and make the personal space your dance floor. His compelling rap verses with his mate Zayrich’s efforts, it hypnotizes us to dive into transcendental atmosphere and forget about the shambolic state around us. He is famous for creating a sensational soundscape that evokes the deepest and darkest feelings in every way.

The rising superstar will be making more indie records soon with the love and supports of his expanding fan base worldwide. Songs like ‘BEYOND A W’ and ‘GAMES OVER GAMES’ are not just rap songs about hearts and daggers but also the journey of the long road he has taken to get to the position where his name will be on everyone’s lips. He believes music is not only derived from emotional attachments but physical reactions too and that is why he makes songs that are empirical and extraordinary. Follow him on Instagram to check all the latest happenings in his musical life.