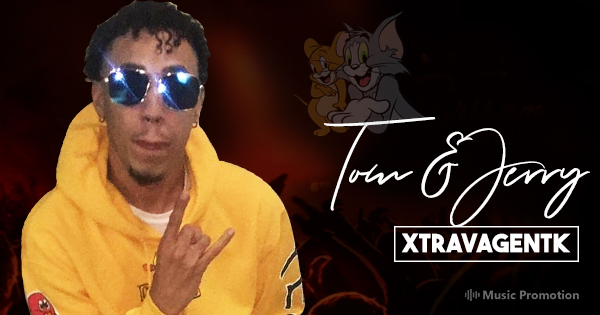 For a very long time, the hip-hop industry had been saturated with artists presenting a similar style of music. But breaking all such ceilings with his tremendously energetic performance, rapper XtravagentK has landed in the scene to present his exquisite energetic compositions. The thrill in the artist’s voice is addictive and so is the energy which he displays while delivering the rap. His songs are what can be claimed as hardcore hiphop that is generally characterized by anger, aggression, and confrontation but all in a good sense. He is an Upcoming California rapper who has become widely popular due to his unusual potential and vivacious energy.

With his charming hustler persona, the artist has recently launched his new single ‘Tom & Jerry’ that is a fine portrayal of pumped-up hiphop. The energy and the flow remain high and so is the rapper’s excitement in showing off his stylish rap. The rapper’s flow is technically advanced and is modulated with some rap savvy instrumentals that raise his creations above the others. No doubt his skills and the intention to hit the ear wave’s right in spot never misses the spot and rather gives a strong boost up to the self-esteem. Storming throughout the track with his breathless rap, the rapper makes sure that people find it hard to let go of the song till the finish.

Built under the label RoxKSTaR DRiP, the track ‘Tom & Jerry’ is truly contagious as the rapper wants his fans to get excited relentlessly. When it comes to hiphop, XtravagentK likes to take an energetic route to dispose of his work. Moving ahead to motivate, inspire, and influence people to follow their passion, the artist urges everyone to fight against anyone who says otherwise. His music is a reflection of his thoughts and currently, he is busy working on his upcoming 10 songs EP that is surely going to be another groundbreaking composition. Listen to him on Soundcloud and YouTube, and follow his updates on Facebook and Instagram.

To listen to this song visit the given link: https://soundcloud.com/xtravagentk/tom-jerry