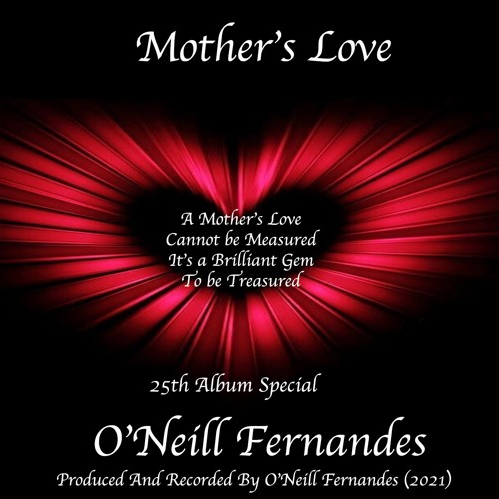 Multitalented music artist O’Neill Fernandes has come up with his latest album that shows his passion and pristine creativity of music. The album is named ‘Mother’s Love’ and consists of a total of twenty amazing singles. The track ‘Bilitis’ is quite amazing with its soft meandering grooves and adequate percussions. The bass is also cleverly used to keep the depth intact without ruining its melody. The track reflects the artist musical artsy that is capable of churni9ng out emotions through instrumental compositions. On the other hand, ‘La Paloma’ offers some invigorating vibes and a hook that is capable of captivating the listeners. Somewhere between retro and modern, the artist shows his adventurous side by building a bridge between them.

It is the 25th album by this versatile Pop music artist from Perth another milestone of his prolific musical journey. Just like the album’s title suggests, ‘Mother’s Love’ is dedicated to O’Neill’s mother Pam and Mother-in-law Hilda. He especially recorded the track ‘Heart of Gold (Neil Young)’ for his mum and ‘La Paloma’ (Billy Vaughn) for Hilda who enjoyed the track while painting. He dedicated the song Lorena (Achi De Lario) to his sister Lorraine. Followed by other tracks like ‘I Believe In Music’, ‘Afrikan Beat’, ‘Isle Of Capri’, ‘Sail On Silvery Moon’, etc; the album is a complete musical treat for everyone while embracing love for mothers.

O’Neill Fernandes is gaining at full throttle on his musical journey as the artist has already released his 25th album with a goal to release more. He is a multi-instrumentalist and progressive music artist who is exploring himself through music. Previously, he has released many albums and numerous singles which portrayed his consistency. The latest track ‘Bilitis’ is taking his aura even further. Follow this artist on SoundCloud, Facebook, and YouTube to know more.

Here is the link to the album ‘Mother’s Love’ by O’Neill Fernandes: