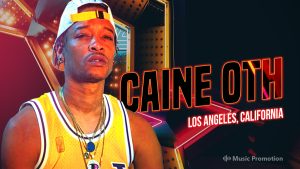 Featuring infectiously melodious digital music and smooth rapping style, CAINE OTH is generating a major buzz with the latest singles. The rapper has recently released a banger named ‘Rage’ which is captivating all kinds of hip-hop enthusiasts along with music lovers around the globe. The track is masterfully crafted with a blend of hip hop and trap music and filled with melody and gritty both. CAINE’s unwavering rapping style not only reflects his lyrical approach but a great sense of original music. The subject matter in the track depicts his confident personality and flawless deliverance that can captivate everyone. Smooth, catchy, and energetic; it is a musical treat for everyone.

As an uber-talented Las Vegas rapper, CAINE is keeping his name out there with each successful music release he makes. Working under his own music label of OTH Entertainment, the rapper has released several bangers throughout his prolific musical journey. Some of the singles like ‘L.A. Poetry’, ‘Richest’, ‘Outside’, ‘No Hook’, etc many others appear on his latest album ‘The Sloth Mixtape’ along with the latest single ‘Rage Intro’. There are a total of 14 tracks in the album and each of them reflects the artist’s talent, creativity, and consistency.

Some of the earlier tracks like, ‘Better’, ‘Paper’, ‘Pressure’, etc have already provided listeners an ample amount of the artist’s psyche and creative mind. And now, the legacy is being taken even further with the latest banger ‘Rage’. The artist is looking forward to crafting mire tracks in the coming days to offer listeners something unique. He is gaining at full throttle on his musical journey and no one can stop him now. Follow this talented rapper SoundCloud, Spotify, and YouTube to have a taste of his music. CAINE OTH is also available on Facebook and Instagram.