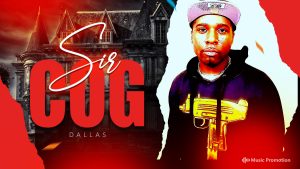 Hip hop industry is vat and thousands of new artists are coming in every day. One of these newcomers is SIR COG, who has proved his worth in the hip-hop music scene with his amazing soundscape. He has been continuously dropping new music regularly establishing his powerful grasp over the industry. He has come up with his finest number so far, ‘Chrome It’ featuring unparalleled rhythmic weave and polished rap performance. He dives into the melody armed with his lightning-fast rap verses and an equally pummeling rhythmic backdrop. He has established a perfect atmosphere for his listeners to enjoy his music using their own imagination in his next soundtrack, ‘Blood Sweat & Tearz’.

The highly talented singer-songwriter is an avid fan of the genre of hip hop since his younger days. He always had a talent for expressing his thoughts through eloquent words, which motivated him to become interested in music-making. He found solace in the expressiveness of hip hop and dedicated his career to bringing a new change in music. He has been signed as the main artist of the celebrated music production house TKR Embassy Media. With their backing, he is taking his music to the next level, bringing a revolutionary wave into the contemporary scene.

The young and aspiring hip-hop star is taking over the independent hip-hop scene with his creative thematic approach. SIR COG is always open to changes and improvements in his music. The new successful hip hop artist has released two incredible songs, ‘Chrome It’ and ‘Blood Sweat & Tearz’ that bring the audience a lot closer to the artist. The sublime message in both the songs provokes the thoughts of the listeners. Listen to his music on SoundCloud, Spotify, and YouTube. Follow him on Facebook and Instagram to stay connected with his future works.

Please visit here to listen to the songs of SIR COG: