This hip-hop artist SIR COG has never let his fans down. His form of art is flowing with powerful words that are completely in sync with aggressive hip-hop music. Hip-hop is a very expressive form of art that can have a daunting impact on hip-hop enthusiasts. His song ‘Street Creducation Freestyle’ has the same aura of truthful self-expression. This song was produced by the record label ‘TKR Embassy Media’, a newly found major music industry record label. And SIR COG is their main artist. This same music record label has produced many of his songs including ‘Still DPGCz Freestyle’. This song is one of his finest tributes to the genre. 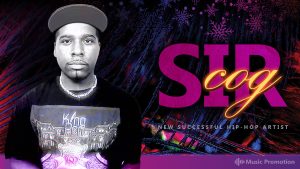 Each of his songs has reached a large number of people within a short period. The unyielding nature of his expression has gained him this much popularity. The core accent of his music is very honest to this huge Hip-Hop culture. Similarly, this new successful Hip-hop artist has mastered the art so well that his songs seem inseparable from his earthly existence. This independent artist SIR COG spoke recently, about releasing singles this coming summer, followed by an album. He also added about tours which will be conducted soon enough. With a compact schedule of the future, this new-age hip-hop rap artist is all set to fly high.

This brilliant artist has always been bold and clear with chosen words he speaks. He has suggested young artists create individual music so that they can flourish in their way, by creating interesting content loaded with self-expression. Apart from his overpowering number like ‘Street Creducation Freestyle’ and ‘Still DPGCz Freestyle’, he has launched several humongous hits like ‘Wit My Pen’, ‘This Ain’t No Joke’, ‘They’re Dying’, ‘They’re Dependin’ On Me’, ‘The System’ and many more. After witnessing his hits, his fans are vouching for more monstrous hits soon. Follow him on YouTube, Spotify, Facebook, and Instagram.