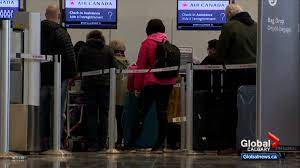 The Canadian government has forecasted a new wave of Omicron variants is coming, so all the non-essential international flights will be on hold.

All the Canadians are rescheduling their holiday plans. Officials are saying that everyone should avoid non-essential travel. After hearing this public relations consultant Tracy Lamourie said that she is unsure about her next trip with her mother to Malta this January.

Lamourie even said that she and her mother both are fully vaccinated and they are not really scared of being infected; they are only worried about the fact that if international flights abruptly shut down. And they don’t want to get stuck outside of their country.

Canadian Health Minister Jean-Yves Duclos declares in a press conference that it is not the right time to travel. Everyone should pause their plan due to the spread of the Omicron variant.

As the virus is spreading drastically everyone should rethink their travel plans, they might get infected by the virus and be trapped in a foreign country.

Everyone is getting so freaked out because this variant is more contagious than the others, the speed is peeking up in the U.K. and Denmark where the vaccination rates are the same as in Canada.

Till now whatever the scientist got to know about the virus says that this variant has more mutations and does not lower the effect of the vaccines and the possibility of severe suffering is much lower than Covid-19.

After all this, the government is not banning travel within the country or outside. They are just asking to pause the plan just a few times just for the sake of safety precautions.

Because of the previous pandemic, the whole hospitality and travel system of Canada has been shattered. They are still recovering the previous damages, and only for that reason, they are extra cautious this time.

CEO of WestJet Harry Taylor said to The Canadian Press that the government are panicking and spoiling the travellers’ plan in this holiday season. Everyone with double vaccination should be allowed for travelling. And all these bans on tourism is affecting the economics of the country.

A thousand customer has already cancelled their tickets said the Air Transport Association of Canada John McKenna. He even said that people are not afraid of Omicron they are afraid of the government. They don’t know what to expect from the government.