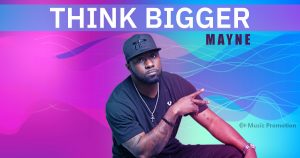 Artist Mayne brings the audience under his cover as he sings in the most genuine way to uplift the audience’s mood through his soulful hip-hop song ‘Think Bigger’.

Mayne emerges with a sound that was much anticipated by all fans of the hip-hop genre. Espoused in an artful blending of soulful music and well-articulated rap, the artist has released a musically captivating and emotionally endearing soundscape that sounds pleasing to the ears. The song finds the talented spiritual artist relying less on technical prowess and shines bright with his raw emotion that provides enough reasons to rely upon his uncrackable musical foundation. The irresistible effect of the rapper’s voice glues everything together and the production can be well cemented as a pristine production that makes his voice sound ten times more soulful.

‘Think Bigger’ has a great deal of earthy, organic elements infused within itself that raises the ability of the sound to impress the audience. Hip-hop has come a long way but the latest creation by this Maryland rapper is something completely refreshing and steadily stirs the gear against the repetitive hip-hop mixes. The soul music combined with the artist’s perfectly paced rap is highly appealing and the audience gets to witness a breathtaking talent pouring his heart out. The song has been crafted out based on emotions and psyche rather than the ego that helps the listeners readily connect to the heartfelt content. Mayne is a talent who thrives on originality and the latest composition is no different.

Built under the label Osirian Records, the song ‘Think Bigger’ brings to the focus on how every obstacle can be overcome if a person believes in self even if that means overcoming the most depressed states. The artist believes in his craft and the energy it emits to heal any depressed soul. The soulful singer brings influences from several genres to create his sound that sounds tremendously engaging and attractive in his charming voice. Lately, the artist made his appearance on a radio interview campaign and is working on other interesting projects as well. Listen to this well-composed positive hip-hop track on Soundcloud and follow him on Facebook, Instagram, and Twitter for more information.

To listen this track click the given link :
https://soundcloud.com/mayne-man-24834448/think-bigger