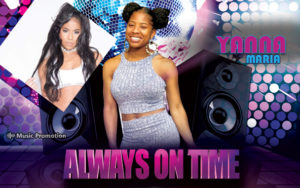 Yanna Maria can be categorised as the young star on the rise to her success among everyone else. With so many other artists trying to showcase their talent, none of them has the flare that this young lady seems to possess. All her songs seem to spellbind the audience into listening more of her tracks. Being from the United States she is one of the best singers who can represent the country. She is extremely popular among the youth of this generation. Most of her tracks are based on the genre R&B and soul, but this doesn’t stop her from creating music based on other genre s well. Her song ‘Always on Time’ is one of a kind in its creation. She has her own production house with her father owns titled as Austin Music group.

She mainly takes her influences from Aaliyah, Whitney Houston, Aretha Franklin, Mariah Carey, Beyoncé etc. Yanna Maria creates songs as a motivation for women to be strong and stay strong. Her song ‘Always on Time’ is something significant and yet fresh at the same time bringing something new for modern music fans. Her voice plays the key role in bringing the different genres together. It has got both the intensive and contemporary finish to it. You can’t help but get caught up with its rhythmic tunes and groovy beats. The colourful ambience of the song will hypnotise just about anyone. As a famous RnB singer from Baltimore, she is on the path to creating an identity which everyone acknowledges.

But more so than her sings it is her behaviour that has captured people hearts. Her social media such as Facebook, Instagram, Twitter and YouTube reflects how popular she is among her fans. It is truly inspiring that she has achieved so much in such a short time.

To enjoy this track just click the given below link :

For more updates simply check out the following sites :