Giving his creativity a chance to shine through with the help of his creations is a new EDM DJ Matt J. Even though he has recently stepped into the music industry, his recent creation ‘Spring Depth – March 2019’ has received the worldwide appreciation owing to the intense imaginative soundscape and backdrop that has been incorporated into the track. This London EDM DJ hailing from one of the most passionate music-loving places around the world is extremely popular among the young crowd for his celebratory dance tracks. Matt J has released a total of 2 tracks both being based on a different genre while being unique on its own. 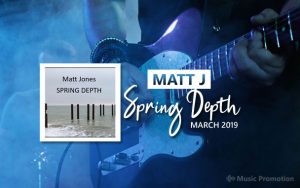 Coming to the compositional framework of the track ‘Spring Depth – March 2019’ it is focused on the genre of techno making it the fusion of multiple elements of various melodies and rhythmic patterns. The soundscape of the track is captivating in nature making it one of the best dancing tracks out there in the music world. Matt J takes influences from everything and anything making his creations so fresh and new for the audience to enjoy. The artistic thread of Matt J runs deep through the creation ‘Spring Depth – March 2019’ while the professionalism implied by the DJ is truly impeccable.
‘Spring Depth – March 2019’ has been turned into reality by mixing and matching a total of 15 tracks together and blending each creation with the other with melodious beats. There is zero lyricism in the track which allows the audience to go wide with their imagination and roam free in the world produced by the talented DJ Matt J. The style bought forward by the DJ is innovating in nature which stands no parallels in the music world.  You can now follow Matt J through his profile on SoundCloud.
Spring Depth : https://soundcloud.com/matt-jones-uk/matt-jones-spring-depth