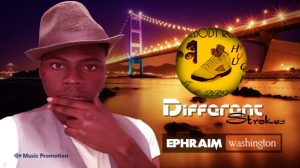 Listeners can’t recall when was the last time they experienced such a distinct rendition like ‘Different Strokes’ by Somebody Rockin aka Ephraim Washington and were so touched. In general, Soundcloud always arranges these kinds of variety of tracks which brings diversity on this musical platform. Well, this artist has brought in such diversity with his unique piece of work. The song ‘Different Strokes’ is literally different from other songs. Despite having a moderate tempo you will not feel monotony when you will listen to it because of its hard-hitting impact over the minds.

The fascinating voice quality of the male vocalist sounds quite intense when listeners listen to this song ‘Different Strokes’. The rap which engulfs the song sounds quite captivating to the music admirers. As this song progresses you will find it’s depicting a very realistic aspect of life. The lyric which weaves this entire track portrays hardcore truth about life. The singer has designed this composition in such a manner that it’s exceedingly realistic in approach sounds entirely credible to the listeners. How differences in human beings can be compatible at the same time, it’s the versatile singer Columbia Somebody Rockin who has articulated that with his powerful rendition.

This profound lyric has hit the hearts of the listeners directly and they are moved by its intensity. You will be eagerly waiting for his next song once you listen to this current track ‘Different Strokes’ of him. This song ‘Different Strokes’ emphasizes the singer’s realization about struggles of life, how one has to overcome obstacles, how negative matters can be turned into positive factors etc. He is an independent producer who releases all his songs on his own. He grew up in South Carolina and aspired to become an established artist. Hopefully, he will shine more in future life. You can check his profiles on his Facebook and Instagram accounts.