Leonardo Dicaprio’s Offer Of A One Night Stand Turned Down By Whitney Port; As She Recollects 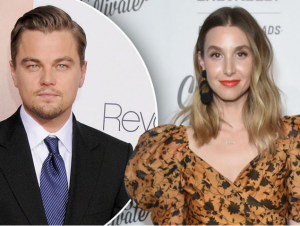 Whitney Port, who has starred in The Hills: New Beginnings married  Tim Rosenman and is living happily with him. They have given birth to a beautiful little boy named Sonny but the reality TV star could have been in a different life path altogether.

Whitney Port Stand With Leonardo DiCaprio and recalls in one of the episodes of the podcast that she belongs to, called With Whit, that the romantic life that she has been through would have been different had she said yes to an invitation for spending a night with Leonardo DiCaprio in his house.  Andrea Cuttler, Port’s best friend had a discussion with her about how she got a chance to spend a night with an A-list star from Hollywood.

Cuttler and the MTV star was at the Avenue Club of New York City in 2009 as Port was shooting for the film The City. Both of the best friends met with Rihanna and had a gal time that night.

Both Cuttler and Port were surprised as DiCaprio came and introduced himself. The actress from The Hills had a word with the hunk from Hollywood and phone numbers were exchanged.

Text messages were shared between Dicaprio and Port for close to six months. During that period they met only once. It was more nerves than any other reason that she could not get hooked to the movie star and fell for him.

As Port says, she was first invited to Teddy’s. Later he got an invitation to Leonardo’s house. But she turned down the invitation. Port was very nervous as she never had the experience of a one night stand. Port did not want to be alone with him. She heavily regrets that she lost the chance out of sheer nervousness. She thinks that she is cool now but on that day she was not. She wonders whether Leonardo remembers the incident and the very short relationship.

The two best friends Port and Cuttler speculated on Port’s decision and contemplated on how life would have been had she said yes to the invitation that night. Had it been that she was not nervous, it may so happen that it might spark off a romantic relationship between DiCaprio and Port.

It would be impossible to know what would have happened between DiCaprio and Port if she had accepted the invitation and visited his house. Although it is one of the biggest regrets in the life of the star from The Hills: New Beginnings she is pretty much happy about the way her life has shaped up.

It is always good to wonder about what would have happened when there is a romance with a hunk from Hollywood and that too DiCaprio. Ass to that, Port is now in a very comfortable place to discuss the invitation for one-night stand and how she managed to turn it down for the actor from One Upon A Time In Hollywood.