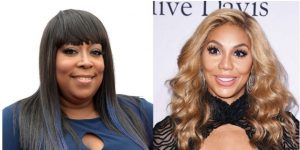 A changed Tamar Braxton has issued a sincere apology to the ladies of “The Real” for her past behaviours. And it shows that Loni Love would prefer Braxton to come back to the show once again. However, the reaction of the cast members of this talk show is not clear still now. Though Braxton has already pledged an apology for her pettiness and drama but originally while she left the production some controversy raised.

Rumors present that Braxton was fired from the show but according to this gorgeous lady it was a mutual decision from both the side to leave the production. It’s been three years that she was fired and during this period the ladies had thrown shade at each other a lot. David Adefeso’s girlfriend has, therefore, maintained her dismissal from this American syndicated talk show which was considered to be nothing but a set-up. Braxton told her co-hosts and former friends are willing to see her leave.

However, this accusation was denied by every co-host of this talk show and Braxton’s leaving the show had left them in utter shock and surprise.

According to Loni Love, everyone has formed different stories on the firing of Braxton from the production. Well, Loni Love responds to Tamar Braxton‘s apology and believes that things will come down to a better situation. It has been claimed that her behavior was shattered due to the troubled relationship with her former husband Vincent Herbert.

Right now, “The Real” is still going forward without Braxton who claimed to work on her show.

Another fan proceeded by saying that it cannot be concluded in this way as the co-stars as reported before had conspired to fire Braxton and now wanting her to be back on the stage. The fan further said that Braxton’s life is going fine without the show!

A supporter revealed the love for Braxton to be back to the show once again even if it’s possible as a guest.

While a fourth person commented that the co-hosts can meet Tamar behind the screen and then go for “The Real” as it will help them all to go to a better conclusion.

Well, Tamar might return to the stage once again to meet things up.