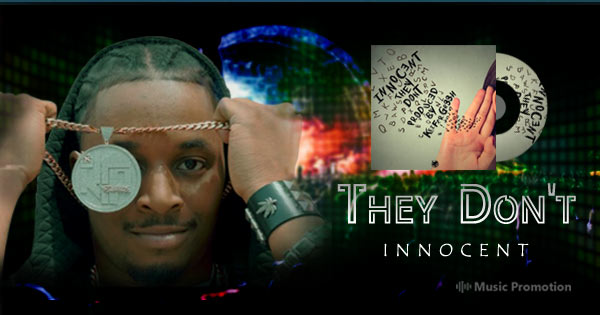 Innocent, the talented singer wants to keep the name that he has got. The track, ‘They Don’t‘ which is his latest offering, is an enigmatic song. R&B and hip hop genre of music is his forte. He does not feel like limiting himself to any particular genre. KTP studios are the production house that he owns. The theme of his songs revolves around love and life and facing the troubles of life and come up fighting. Many legendary figures have inspired him over the years. Michael Jackson is one of them. The legendary figure has been a great inspiration in his life. Lil Wayne is another singer who has been a great influence. There are other stars like Keelo and Tpain. To know more about the singer visit his profile on Twitter, Facebook and Instagram.

In the song ‘They Don’t‘ by Indiana music artist Innocent, the singer has shown his enigmatic side. There is a quiet rasp in the song that makes the soundscape even more enviable. The vocal style of delivery has mumble in the rap that creates a distortion that goes well with the song. The funk of the song will make you sway down the high street in a carefree manner. The fusion in the song has been incredibly done.

Innocent is a very accomplished singer and his rendition ‘They Don’t‘ is a very beautiful number. The impressive thing about the song is that it is loaded with emotion and is very much likable. the bounce of the song is upbeat making the listeners feel good. The song-writing is done in such a way that that it uplifts the mood of the listeners profoundly. The song has got stunning performance. The groove for the song is very much addictive.

Just go for this track ‘They Don’t’ on SoundCloud :