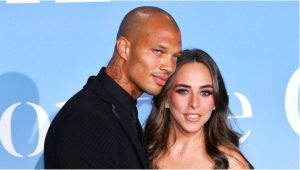 Jeremy Meeks as known as ‘Hot Felon’ revealed the actual status of his relationship with Top Shop heiress Chloe Green. Not a long ago, Chloe was seen kissing Rommy Gianni and this incident led to the controversial rumors that Jeremy and Chloe were no longer together.

Yesterday, when a paparazzo asked Jeremy about his recent equation with Chloe, while the American model was heading to his car, he revealed the actual truth about his relationship.

Despite this heartbreaking incident of being cheated on, the model seemed to be quite happy while getting into his car in LA.

When TMZ asked him about his thoughts on Chloe ‘hugging’ Rommy, he smilingly replied that it wasn’t anything. And finally, Jeremy Meeks insists he And Chloe Green are still together.

It was quite astonishing to see Jeremy not being troubled by this scandalous event, as Chloe was seen to be completely topless while being with Ronnie on her father’s yacht.

This controversial picture was caught on camera on the 12th of August.

According to the statement given by one of the insiders to US weekly, despite the model turned down the rumors of his breakup, there is no relation left between the star couple.

As stated by the insider, they had separated from each other about two months ago, but are still in on and off speaking terms.

It is also possible that the scandalous event of Chloe took place after their split, as the rumors of their breakup started to wander around from the month of May.

After all this, Chloe answered all the rumors saying that he and Jeremy are still in very much love.