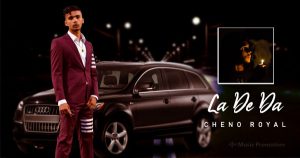 Cheno Royal takes a maverick step of combining super chilled beats with an expressive narrative that dresses his songs as a perfect soulful ballad. The groovy harmonies combine with heartfelt lyrics to make the Indiana rapper one of the most familiar names in the music industry. He is undoubtedly one of the finest rappers whose cohesive compositions convince the listeners that he is a remarkable artist bringing undeniable energy with his songs. His career is on a peak as he moves forward to offer diverse musicality in his soundscapes. The artist aces his production by combining R&B, soul, and hip-hop elements to his music to release one of the standout records of the year.

With the release of each track, Cheno Royal shows an immense amount of progression and becomes a generator of trends. The handcrafted sounds with hints of electronic music and soul influence generates a lush sound helping the Indiana rapper to emerge as an important influence on today’s music. The tracks ‘‘La De Da‘, ‘Royal Life’, ‘Dont Play Fair’, and ‘Never Have I Ever’ under the label name RCP have an interesting quality with high production standard and the artist shows his vocal skills impressively. The tracks are laden with emotional gravity and add up to make the tracks feel so relatable. The amount of emotion he puts in his rap delivery raises the bar of his songs and makes him one of the worthiest rappers.

The tracks inject energy in the room with a sudden intensity of the artist smooth voice. All his compositions flourish to hint that the artist is very much capable of reaching heights in hip-hop. Great musical work combined with distinct rap style make the songs worth listening to. Listen to him on Soundcloud and catch up with his updates on Facebook, Instagram, and Twitter.