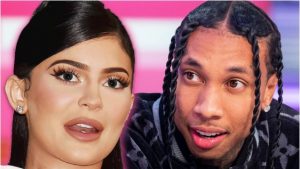 During the birthday bash of Sofia Richie, Kylie Jenner bumped into Tyga, who is her ex and quality time was spent between the two. Kylie Jenner And Her Former Boyfriend Tyga Reunite At Club During a wild bash. The ambiance in the party was wild and all of it happened in a Las Vegas strip club.

According to an insider, who spoke to Hollywood Life that the Kardashians and the Keeping Up star and her ex-boyfriend who is a rapper spent time together in the Karaoke room which is a room in the VIP suite of the club. Both of them arrived separately which is apart by about 20 minutes and went inside to spend quality time together.

According to an insider report from another source by TMZ, it was claimed that it was a brief hangout.

It was seen that both Kylie and Tyga went on to greet each other in the most friendly manner while they were present at the club and there was nothing more than that.

It was a co-incident for them to bump into each other and the meeting was very off the cuff and not at all planned.

The news reported by the source from Hollywood Life was just the opposite.

According to that source, it was dished out by an eyewitness there that it was not a mere coincidence and it seemed that they were present there at the club so that they can meet up.

According to the source, both of them seemed to like having a friendly approach.

The split between the rapper and the makeup mogul happened two years ago and there has been a lot of changes after that.

According to fans, another rapper, Travis Scott had a baby with Kylie and they are very much happy together in love.

Kylie is very fond of her parenthood as she is in love with baby Stormi to the bits and she is doing very well in parenting her.

However, Travis was not present in the birthday bash of Sofia.