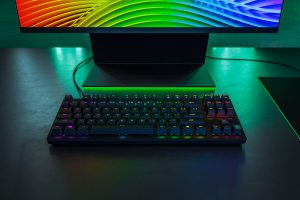 One of the most popular brands in PC gaming, Razer has announced the release of Huntsman Edition gaming keyboard. The Newly announced Razer Huntsman Tournament Edition has its look similar to the original Huntsman and is very much compact in design. It is also said to be an eSports level gaming keyboard; hence it is designed for speed.

The Huntsman TE uses Razer’s light-activated optical switches which is a revolutionary technology debut guarantying blistering actuation. The latest addition smoothly actuates at1 mm while the original actuates at 1.5mm.

Razer pioneered mechanical gaming keyboards and have designed to withstand intense training and competitive use. However, Alvin Cheung, the Peripheral Business Unite Senior VP has accused athletes to have used Razer for misuse and further added that anyone using the new once can feel the difference in performance immediately.

The Huntsman TE has been tried, tested,  and validated by several Pro eSport players like MIBR’s TACO, Seoul Dynasty’s Ryujejong and Arteezy, the Dota 2 guru from Evil Geniuses who have confirmed it to be the ultimate keyboard with super fast hit buttons.

The new Razer features the thinnest, sleekest font available in a PBT keycap and they have manufactured their Proprietary tooling to produce sturdy double shot PBT caps which guarantees up to 100 million keystrokes.

Gamers can choose to replace any key with a third party keycaps of their choice which makes the Huntsman Edition one of the most customizable keyboards which don’t require configuration of the mouse.

For $130, the Razer Huntsman Tournament Edition is now available at the Razer’s Store and is also available on Amazon at the same price as the standard edition.

Coming with a back up of 2 years just like the original Huntsman the Tournament Edition is undoubtedly the best choice for any gamer or computer user looking for enhanced productivity.