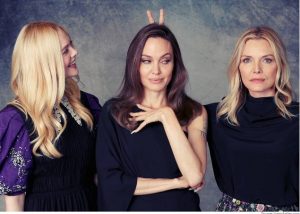 The attractive woman that Angelina Jolie herself is, the beautiful woman looks like she had a girl crush. In a press tour for the movie Maleficent: Mistress of Evil along with co-stars Michelle Pfeiffer and Elle Fanning, Jolie gushed about the former and proclaimed love for the actress as she could not help herself.

It was since her teenage years, that the Maleficent: Mistress of Evil actress had a crush on Michelle Pfeiffer who has been a legendary actress.

Yes, you have heard it right. During a movie promotion together it was mentioned by Angelina that while she was growing up, she found that Michelle was really ‘very hot’.

In a particular role in the movie where Michelle played Elvira in Scarface in 1983, Angelina admired her a lot.

All these things were revealed when the actresses were speaking to Access Hollywood and every one of them was asked about their respective crushes during their teenage days.

When Jolie was asked about it, she looked down as if she was in deep thought and was quite hesitant to reply.

Because of this Elle got time to answer as she jumped in and said that her crush was Danny Zuko from the movie Grease.

Jolie was quick to reply as she turned her head towards Michelle and said that she loved Michelle in Grease.

Michelle then turned to Jolie and asked her whether she was her teen crush.

At this moment, in great admiration for her, Jolie added that she had a huge crush on Michelle. She further added that when Michelle was on a ladder and was singing ‘Cool Rider’, she was looking very hot. Jolie continued adding that she also had a crush on her in the movie Scarface.

Fans were interested in the conversation as they took a clip of it and took to Twitter by posting the caption which says that Angelina has left her husband already and inquired Michelle what she is going to do.

Many interesting reactions came about for the video as the fans thought that Jolie is very much like them. Some of them said that their first female crush was Michelle Pfeiffer while Angelina Jolie is their second female crush. Some of them even told that they are in a girl crush heaven right now. there was a caption that said that she met Michelle Pfeiffer 4 years ago in a fabric store and it has changed everything for her as she was not the same post that meeting.