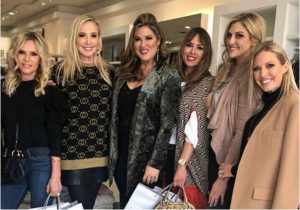 During the cast trip to an Arizona Spa of the latest episode, Kelly Dodd and Vicki Gunvalson hug it out on RHOC  that had started during the last season’s reunion, when Kelly was accused of using cocaine by Vicki. This bicker continued on social media as well, during the show’s hiatus. During the initial shoots of the 14th season, they even avoided being in the same room. Gunvalson also accused Dodd of being on a ‘sex train’ with many men. Dodd texted everyone pig emojis along with the audio clips of Vicki.

During the shoot of the last few episodes, the ladies of the show have been living at Miraval Resort and Spa of Tucson, Arizona. But, not everything went according to the plan of the organizer Shannon Beador, as almost everyone indulged into fights and it seemed like Dodd was in the middle of all the problems.

During this trip, Gunvalson said that due to the bad reputation of Dodd, she wasn’t even allowed to visit her daughter at school and this led to the unfortunate incidents of Dodd verbally abusing the OG of the OC while being on a call with her ex-husband, Michael.

Later, it came to Gunvalson’s mind that she had heard all these rumors while being on a salon, about a year ago. Tamara Judge told her not to keep gossiping about this.

Judge said that she wanted both of them to be friends again but neither of them was ready to take the initial steps.

Then suddenly things took a turn as during a cast dinner the entire cast consumed a lot of alcohol and to everyone’s surprise Dodd apologized to Gunvalson for hurting her so much. Then Gunvalson hugged it out with her by telling that they both had a long history together.

Gunvalson surrendered herself and in a confession statement, Dodd said that she wanted to stop this ugly war with Gunvalson.

Dodd also added that she had never hurt Vicki and had always supported her and Vicki’s behavior towards her was quite disheartening. She also said that she called her a pig because Slade Smiley called her so but she didn’t really mean it.

Hearing her confession Gunvalson felt guilty of spreading rumors about Dodd taking cocaine. Then Kelly apologized to Vicki and finished their long feud.

When the ladies were asked by Beador to promise that there would no longer be such kind of incidents, Vicki stated that she was done with that.

Judge remarked that the spa was a success. Fans can watch the new episodes of Real Housewives of Orange County on Tuesday nights on Bravo.