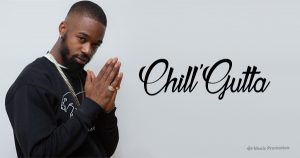 CHiLL’GUttA proudly opens the door of appreciation with his impactful and dominating song compositions. He combines his rap energy with his singing abilities and then adds some experimental and innovative touches just to show off his immense artistic approach. It’s a smooth move to include such catchy hooks that contrast powerfully with his rapping honesty. The Los Angeles rapper CHiLL’GUttA is gloriously stuck on performing fast-paced and rhyming rap that seems like his secret formula to stand out amongst the other hip-hoppers of his generation. He is the driver of his own skillfully curated tracks and steals the spotlight rightfully by delivering the attention-grabbing words effortlessly.

The artist fully sinks the musical space while delivering the tracks which is designed to garner the listener’s attention. Few such tracks like ‘Fake niggas out REAL NIGGAS IN’, ‘The Wake Up (Prod. Reuelethan)’, ‘The Get Off (Prod. Reuelethan)’ and ‘That Nigga (Prod. Reuelethan)’ coming from his label The Billion Dollar Company LLC quickly picks up the energy and pace to showcase CHiLL’GUttA’s stylistic side performance-wise. The eclecticism is subtle but effective and the unusual groove which comes with his voice demands full attention throughout. With his raw skill and versatility in the tracks, the artist allows his sheer enthusiasm to do what he’s set out to do.

CHiLL’GUttA’s clean and leading voice fused with some appealing sonic instrumentals adds a moment of pure escapism and begs the listener to turn up the volume. The lyrics are revealing and heavy, but the artist brilliantly steals the show with his flawless and sharp rapping abilities. Coming from Los Angeles, he has offered some of the most rewarding music creations that show he is all set to change the course of hip-hop in his magical way. Listen to the songs on Soundcloud and for more engaging content follow the artist on Facebook, Instagram and Twitter.

For more songs visit the given soundcloud link :