The upcoming young artist from Australia, Devious R continues to astonish his fans with the greatness of his musical artistry. Newcastle Rap Artist of only 17 years old released his 2nd EP ‘Sick To My Stomach’ as a gift to his worldwide loyal fans to succumb to the depth of emotions and melodies he has stored for the new year. He chooses to bring out the 2nd EP in the month of December to have more impact over the broken and emotional souls and be able to see the sun of a new year in a different light leaving all the mindly skirmishes. 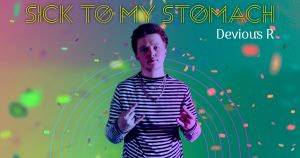 Devious R is a young Australian rapper who is excelling in his expertise in the hip hop genre with passing years. He is now evolving himself into a versatile artist and producer. He is intrigued to be a rapper because he wants to let his feelings and fear out. He made several hit singles and playlists that made some noise early this year. He has a collection of frenzied followers who relate to his songs and raps and try to come out strong from a heart-wrenching situation. Currently, the young rapper is trying to put his hands in a slightly different genre that is emo-rap which a novelty in itself. This is an emerging trend and Devious R is devoting all his time for his passion.

‘Sick To My Stomach’ has five hip hop tracks twisted with some exclusive variations and novelty. He is a penchant for creative music and that is understood well from ‘Young And Addicted’, the second track of the EP which is composed of alternative hip hop rhythms. It has a captivating hook that will compel you to go to the bottom with the song. ‘Ghost Me’ has an interesting and gripping chorus that will take you on a ride to the dark chasm of a broken heart. The song evokes a lost sensation in your mind as he narrates his failure in attaining true love. The other three songs ‘I’m Not The One’, ‘Sick To My Stomach’ and ‘Cold FT. Vishisdead’ are equally emotive with his skills in emo rap and engrossing hip hop rhythms. ‘Sick To My Stomach’ is produced by Nexeration and is out now on Soundcloud. He posts his works on youtube, facebook, and Instagram as well.

‘Sick To My Stomach’ presented by Devious R on soundcloud : https://soundcloud.com/user-deviousr/sets/sick-to-my-stomach