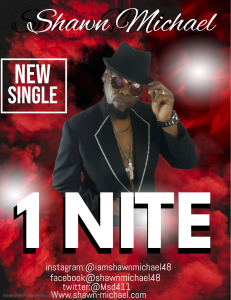 The true essence of modern-day hip-hop song structures is beautifully written into upcoming artist Shawn Michael’s newly released song, ‘1 Nite’ from the album, The Resurrection. The song’s thematic encryption is simple; it is about an entertainer on the road attempting to cross paths with women in the town he is currently in. Although, from a distance, ‘1 Nite’ seems to be straightforward without the complexities of emotions, but dig deep and one can unearth a universe of interpersonal dilemmas that drive our lives on a regular basis. The song comprises of structured rhythmic patterns and the vocal intensity of Shawn Michael himself that collectively formulate the groove. From the intense storytelling to the musical bling, ‘1 Nite’ is an instant mood elevator.

Shawn Michael is a South Carolina hip hop artist who has always perceived music and entertainment as his destiny and path to spiritual completion. He is currently signed to his own production label Shawn Michael ENT that provides the right representation and platform to showcase his creative flairs. Some of his other songs like ‘Want It All’, ‘About Me’, ‘Party2nite’ and ‘Dream Girl’ beautifully capture his moral virtues of being as a musician and also as an entertainer to the whole world.

Shawn Michael, born Michael Davenport has his versatility shared as an actor, comedian, motivational speaker, and music artist as various thriving aspects of his colossal persona. He is also the CEO of The Hain Foundation, a non-profit organization that gives him the scope to spread the actions of his heart of gold across communities. As he continues to make hip-hop the central prospect of his life, his eyes are set to emerge as one of the best artists of the genre. If your musical preferences are ready to experience the best emerging artist in the industry, follow his work on Soundcloud, Instagram, Twitter, Facebook and his official website.

To listen this song click the given below link :

For more updates check out the following social media :