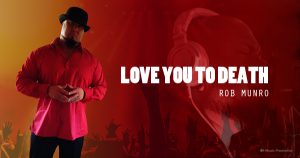 The lead  singer of newly formed blues and metal band hailing from the United States, Rob Munro makes his first move to hit the spotlight with his first release ‘Love You To Death’ that is available on Soundcloud. The band is made of interesting musicians like Tony Rosacci as producer and guitarist, James Steinbacher as the sound engineer, also in Keyboards, Steve Vanderwerk in Drums, and Andy Irvine in Bass Guitar and the euphonious vocals of Rob Munro as their lead singer.

Granby Blues Metal singer Rob Munro is a prominent vocalist who has excellent grips over both the blues rhythms and hard metal vibes and the first one to come up with the creative project to merge two distinctly different genres and altogether form magic. His bandmates are the true inspirations behind this avant-garde idea to incorporate relaxing saxophone harmonies with dark and heavy guitar chords welded with lyrics that bear out the dark emotions of humanity. ‘Love You To Death’ has the perfect blend of refreshing blues with a staggering voice that sings about trivial and significant emotions that make life more beautiful, adding deep metal rhythms to it to comprehend the dark sentiments that chase us. The first single of the band ‘Love You To Death’ is recorded under the famous production house of Eagle Wind studios.

Rob Munro with his gem-like bandmates can find the darkest aspects of our humanity and turn them into art. The wild symphony of heavy metal and realistic lyrics of the song has the power to rattle up the veins arousing the dark sorts of emotions within the listeners’ minds. The song has different facades that have both positive and negative stimulations. One song with a multilayer of emotions requires serious creativity to which Rob Munro is a threshold. Follow his Facebook and Instagram page for more interesting information.