The creative aptitude and musical in hip-hop artist Minel’s new song ‘WE DO IT MAJOR’ is redefining standards in the contemporary backdrop of musical annotations. 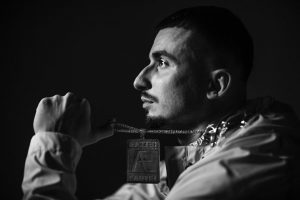 Upcoming hip-hop artist Minel’s newly released song ‘WE DO IT MAJOR’ in a creative collaboration with fellow musician Ikom Boy is a creative blast in all its glory. The song utilizes the virtues and notes of pop and R&B in an urban setting to produce a reformative take on contemporary hip-hop scales. ‘WE DO IT MAJOR’ constitutes artistic freedom that is prominent in its hard-hitting beat drops, lyrical expressionism, and captivating musical hoops and hooks. A distinct connection that the audience instantly feels with Minel’s voice jumbling across the entirety of the song, ‘WE DO IT MAJOR’ is the upcoming club anthem that instigates party favors to feel its beat deep down and just let go in its boundless vigor and cultural celebration.
Minel’s story is not very different from all those kids around the globe who grew up in a tough household with every struggle slithering its way into his life. He has had his share of doubts and anxiety, but in the end, music gave him the closure that he was looking for in his everyday dilemmas. Once his objectives were clear, there has been no looking back as he wants his fans to empathize with him and feel their own sagas through his lyrical and musical motifs. His music is more than just another entertainer of urban lifestyles but removes the superficial layers, and one can find himself submerged in the depth and substantiality of the music. Originally from Bosnia, he is already signed to the Dubai-based production house Alpha Entertainment R.A.T.E.D Cartel through which he is successful in taking his musical prospects closer to the audience.
‘WE DO IT MAJOR’ was a production collaboration with DJ YZD who will also chip in with Minel’s production house in the upcoming Extended Play. His sound is heavily influenced by the music of Eminem, Lil Wayne, Meek Mill, and 50 Cent among others who helped him recognize and formulate his sound musical and creative style. Some of the other song credits to his name include ‘Intro’, ‘Im So Broklyn’, ‘Canon Remix’, and ‘Litty Remix’ among others not to mention significant production works with various artists from across the globe. If you are willing to lend your ears to the most progressive hip-hop tunes out there, follow him on his official website and social handles on YouTube, Instagram, and Facebook.
Other links:
https://ratedcartel.com/
https://www.instagram.com/r.a.t.e.d_ae/