The creative progression of hip-hop and R&B strains in upcoming artist Shezi Rosewood’s song ‘No Sleep’ defines new-age hip-hop standards like no other.

Musical boundaries and its open scope of creative opportunities are being revised and presented with renewed vigor by upcoming artist Shezi Rosewood. A distinct crossover between the creative expressions of hip-hop, R&B, and Korean soul, this artist has laid the foundation of diverse and eccentric musical interpretations. He recently came out with his single, ‘No Sleep’ that compiles his extensive creative scope of deconstructing lyrics and harmonies into some of the best lines of thematic storytelling. Being an entrepreneur and an influential lifestyle strategist, his creativity expands in his music as the results captivate his audience with striking wonderment. 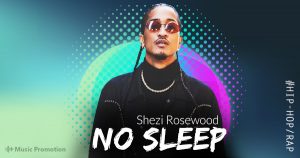 The Los Angeles upcoming music artist is currently associated with the label OU:RS that has further helped him showcase his versatility. ‘No Sleep’ has marked a milestone in his career that harbors the elements of a celebrated musical pursuit like no other. His other song like ‘Space Island’ has also captured the audience stream as he continues to implement his creative feats into his career. His collaborations with artists like Kendrick Lamar, Waka Flocka, Jim Jones, and Curren$y further helped his creative arc come to a full circle.

The scope of Shezi Rosewood’s stupendous feats also allowed him to establish his legacy in the fashion and cannabis industry. He has been featured in outlets like Huffington Post, XXL, Perez Hilton, and WSHH and also collaborated with brands like Urban Outfitters, Coors Light, Backwoods, Adidas, and FedEx. His vast and endless flairs reflect in his music as a cultural and personal tribute to his own life and experiences. As he continues to put forward his wisdom and creative growth into his work, his journey to the top of the game is just around the corner. Follow him on Soundcloud, YouTube, Instagram, Twitter, and his own website for more updates and surprises.

Let’s check out this track on SoundCloud: https://soundcloud.com/shezirosewood/no-sleep-1