Musical artistry knows no bounds when it comes to expressing through creative forms. Hip-hop artist TroyLLF is redefining a fine line of musical glory with his crossover musical essence of Bay Area and the East Coast, setting his sound apart from the rest. His musical carve is realistic and honest also brims with extraordinary zeal and enthusiasm that keeps the audience going with their undulating groove. His song, ‘Paid Dues’ in collaboration with Big Rich and produced by Young Devante is a beautiful retrospection set alongside a captivating rhythmic pattern giving the song texture and creative elevation. 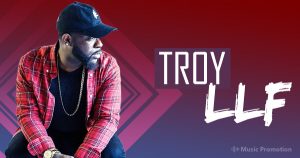 The musical sphere of San Francisco rapper TroyLLF has released numerous songs over the span of his career among which ‘Real Eyes Realize’ is another milestone. Made in a production collaboration with DJ Pain 1, the song proves his artistic greatness in every stratum of creative inclusiveness. With various albums, Eps, singles, tours, and digital features to his name, his spectrum as an artist has only grown over the years. Some of his songs like ‘It’s On’, ‘We Tried’, ‘Risk It All’, and ‘CFWU’ are all his musical expressions that went to make big waves across audience streams. A beautifully curated soundscape with a deep meaning and purpose, his artistry defines the accomplishments of a true artist effortlessly.

Extremely active and dynamic with his musical progression, rapper TroyLLF stands for Troy (of Legends Live Forever) displaying his inner fortitude and conviction in a namesake tribute. Legends Live Forever is also the name of his independent label while his association is also maintained with label house 1015 Digital. With more and more opportunities knocking at his door, his steps to achieving bigger feats are also down the line. Follow him on Soundcloud, YouTube, Twitter, Facebook, and Instagram for this colossal celebration of rap and hip-hop.

Please visit here to listen the songs of TroyLLF : https://soundcloud.com/troyllf