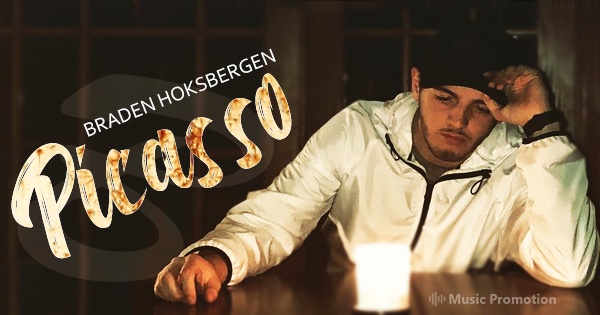 Hip-hop has always been a significant torch-bearer of social and cultural changes since times immemorial and the salient movement of artistic freedom in being carried forward by rapper from Iowa B. His soundscape is a lyrical splendor and a musical confluence of various influences. He recently came out with the single, ‘Picasso’, a tasteful lyrical conundrum speaking about the hardships of life and existence. The song reflects the ideas and perspectives of the artist’s inner mind and soul and the outcome is a beautiful lyrical stream set alongside the rhythmic groove of hip-hop. The song also utilizes the dynamics of trap that makes it all the more in harmony with the creative expressions of contemporary times.

The song ‘Picasso’ is a benchmark of how thematic concepts can change the overall feel of a song. Based out of Polk City, Iowa, he has always put the importance of lyrical content in his songs before anything else. He wants to circulate his music across the audience through his straightforwardness in his lyricism which he believes is the foundation of any song’s structure. He has expanded his creative scope and allowed trap to intermingle with his hip-hop sound making the result a beautiful and complementing resonance. Being unadulterated and honest in his lyrical constructions, he emerges as an artist who nurtures creative independence more than anything else.

Braden Hoksbergen who adopted his stage name B has many other hits to his name like ‘Sleep Deprived’, ‘USED TO IT’, and ‘DIPLOMACY’ among others. His journey as a hip-hop artist with a purpose is just getting started as he continues to enrich his soundscape with more elements and incorporating lyrical magnetism across each and every corner of his thematic outspokenness in his songs. Follow him on Soundcloud, Instagram, and Twitter and be a part of this eccentric lyrical journey.

Listen to this track click on given below link: https://soundcloud.com/bhoksbergen/picasso-1