Relive the Brilliance of D.C. R1CH Who has Come Up with the Swashbuckling Rap Number ‘Colorful’ 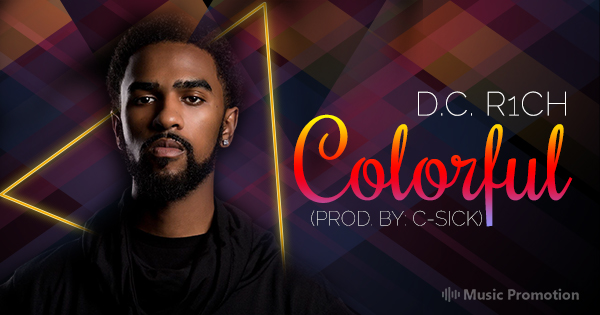 The cash registers have started ringing as D.C. R1CH has taken the onus of delivering some fascinating stuff. He has belted out the cracker of a hip hop number ‘Colorful’ as the pristine production is done by C-Sick. The moods of the listeners are uplifted by the musical prowess of the Californian Rapper. He boasts of owning an up to the minute production house ‘Creative Thought$ Music’ that has state of the art facilities. The fans have filled up the arena as the trap beats are unleashed by the rapper in stadiums that are filled choc a bloc. The fans can log on to the Facebook profile of the singer and get a sneak peek of his shared posts.

There is a mesmerizing melody and beat in the track ‘Colorful’ deftly composed by D.C.R1CH. There is an unwavering passion in the song that comes with a dash of confidence. He has achieved supremacy in dishing out alternative trap beats that swirl in a mind-blowing fashion with authentic hip hop and rap. The slow and seductive groove has a calming and it is accompanied by oodles of fusion and funk. The audiences can plug into the Twitter handle of the singer and start an off the cuff conversation and playful banter with him.

In the riveting track, there are flickers of instrumentation incredibly crafted by the prolific rapper that is quite stunning. Some of the majestic numbers by the singer are ‘2 Legit’, ‘Sauce’, ‘4PM In Chicago’, and ‘Smoking & Drinking’ that has been etched out with a lot of finesse. The fans can fetch relevant information about the upcoming ventures of the rapper by catching a glimpse of the shared updates in his Instagram handle. To listen to the incredible tracks by the singer, the audiences can log on to popular music streaming apps like Soundcloud.