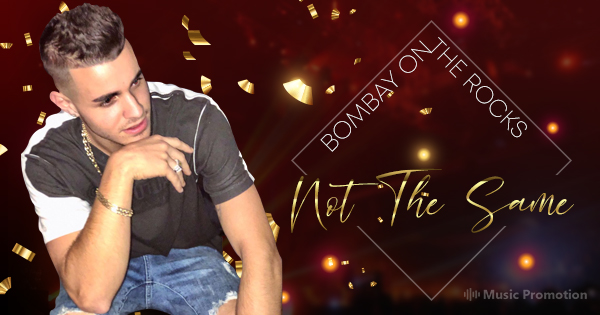 Hip hop has come a long way in the salient history of musical evolution as many artists contribute their eccentric artistic demeanors to make for some amazing and outstanding creative projects Upcoming artist Bombay On The Rocks is treading the same path of creative growth with his trap and R&B infused hip hop soundscape. He recently came out with the single, ‘Not The Same’ presenting a captivating thematic and lyrical scope of musical exceptions. As a hip hop artist, he utilizes his lyrical flairs without any boundaries and offers the audience something extraordinary. With a creative ambiguity, he has paved the path of a new perspective in hip hop and rap.

The upcoming Boston hip hop artist is very passionate about his goals as he envisions a career that redefines hip hop. The song ‘Not The Same’ showcases his lyrical and rhythmic sense as he creates a beautiful progression of various dynamics and modulations to give the song structure and undertones. Some of his other songs like ‘PARAMOUNT’, ‘Havoc’, ‘Jack and Jill’, and ‘What It Do’ all comprise of his creative edges. This allows his audiences to relate to his groove and enjoy the rhythmic sagas with all their hearts.

Hip hop artist Bombay On The Rocks’ ambitious personality brim through his lyrical and thematic designs as he creates a beautiful soundscape with his insights and wisdom. His expressions of hip hop contain new streams of trap and R&B essentials that stir the most creative senses in his audiences as well. From his formatting of lyrical course to the use of rhythmic features, his songs have it all to become the next breakthrough in the spectrum of hip hop. The artist has captured the contemporary sound better than any other as he moves forward in making his career and music stand out. Cheer his creative impetus and be a part of his exquisite journey by following him on Soundcloud and Instagram.

Listen to his creations on Soundcloud now: https://soundcloud.com/bombayontherocks/not-the-same