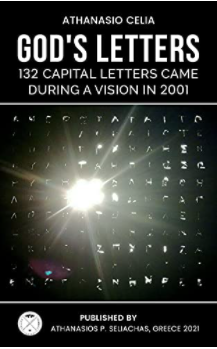 Author, art expert, and author Athanasio Celia came out with his new book, ‘God’s letters: 132 Capital Letters came during a Vision in 2001’, a peek into the premises of spirituality from the author’s perspective.

The book is about a man who recorded a vision in 2001 containing 132 capital letters of the Greek alphabet that created a quadrangular shape 11 to 12. A study revealed that the text is readable in 115 different ways in the ancient Greek language and parallel it encloses depictions and symbols. Besides, it can be simultaneously deciphered mathematically. The whole process of deciphering shows off an unbreakable mathematical, geometrical, and theological coherence which in the end presents 10 big revealing texts. The vision-text, which has as its principal symbol the crucifix of Jesus Christ, turned out to be the Contemporary Revelation.

Athanasio Celia is a visionary artist, expert, historian, and author who has contributed significantly to the scope of art. This Paris-based painter became extensively popular worldwide between 1992 and 2008 during which he accomplished an amplified volume of feats as a painter, art expert, and author. Subsequently, he paved a path of a creative and artistic medium that would enrich collective perceptions across various fields and philosophical ideas. ‘God’s letters: 132 Capital Letters came during a Vision in 2001’ new book is now available on Kindle Edition on Amazon at https://www.amazon.com/gp/product/B094NC22X9/. Stay updated on all his latest news on
Twitter and Facebook.