Upcoming music artist DJ Zman is the newest name on the block that is captivating the audience with his modern take on musical production and remixes. The DJ has created a soundscape that is ever-expanding and traveling beyond what is known and heard. His remixed versions of popular songs render a beautiful and immersive scope of creative appreciation. He has taken his production capacity to new degrees with song remixes and sets such as ‘chill out’. The track is clearly an extension of his artistic personality that contributes to the feel and soul of the music. The artist is expressive and sincere in his job making sure that the track reaches its maximum potential. 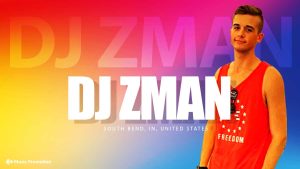 The Indiana electronic music artist also has many long sets that can keep the audience engaged for a long. Another of his remixes that have created quite a stir in the EDM scope is ‘Star Crossed’. The artist shows his resilience and ability to adapt as he glides through the production and its dynamic effortlessly but with a steady and focused hand. His perspective is such that he aims at redefining EDM with his own virtues and approach. The upcoming DJ and music producer has already delivered a long queue of hits that only speak about his accomplishments while giving the audience a reason to let their hair down.

Artist Zack Zellers who goes by the stage name DJ Zman hails from the city of South Bend, Indiana, and is a self-made producer. He started exemplifying his talent at the age of 11. Over the years, he improved his craft and mastered the artist’s production, melodies, and beats. Some of his sets and song remixes include ‘Uphold’, ‘Z Mix Vol 4’, ‘Z mix Vol 2’, ‘Z Mix Vol 1’, and ‘Incorruptible’ among others. To know more about his art, follow him on Soundcloud and Instagram.

Listen to his creations on Soundcloud now: