Dreamy production with the contemporary trap ‘Oreo’ by CAINE OTH has an outpouring rapping style to make it highlight the name of Las Vegas rapper.

Combinations with the bold attitude and a different vocal texture the hip-hop and rap song ‘Oreo’ could be felt like the coolest rap song in the contemporary situation. Moreover, the main feature of CAINE OTH is to have to hook the listener at the very beginning of his music. Moreover, his calm and late-night escapism attitude throughout the song has reflected the passion of the singer for hip-hop and rap music. Moreover, the passion for hip-hop and rap by this singer has been shown upon his consistent tempo and temperament throughout the song. Hence, by composing and releasing this song the singer has set up a fire among the rap song lovers. 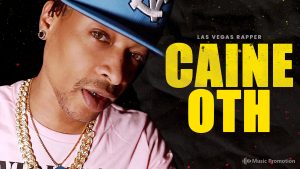 The artist has his production house ‘THE OTH ENTERTAINMENT’ and one can know about the singer from the website of this production house. Here, the singer has shown the flow of the music and the practicality of his music creation. Due to these qualities, the singer has been renamed a Las Vegas rapper. Moreover, the utilization of the fast-paced and slow-paced rapping by CAINE OTH with the musical jamming and rhythmic has set the music on another level. In the song of ‘Oreo,’ the singer has implemented a color of fearlessness, a bold attitude, and a high achieving mentality.

Other rap and hip-hop songs by this artist are ‘Paper’, ‘Sloth’ and ‘L.A Poetry’ who tries to use his own rapping style within each song of him. Each song by this artist has a great essence, which can make the artist a different artist from the other contemporary hip-hop and rap artists. His music can be found on Soundcloud and Spotify music-streaming channels however, he can also be followed on YouTube. Furthermore, Facebook and Instagram are social networking sites that can help the fans to know more about him.